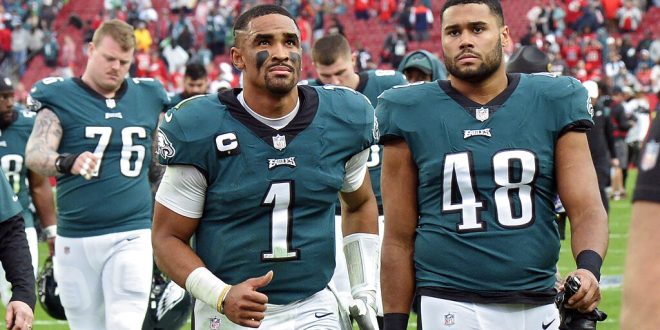 After winning four of their last five games to the end the season, the Eagles held high hopes of making a push in the playoffs. With their first test being the defending NFL champions Tampa Bay Buccaneers, their dreams were crushed early.

The Tom Brady led Bucs jumped out to a 31-0 lead. This made it nearly impossible for the Eagles to fight their way back.

However, Philadelphia was able to score two touchdowns in garbage time with the game basically over. Dominating on both sides of the ball, Tampa Bay came out on top of a 31-15 beatdown.

Eagles Head coach, Nick Sirianni took the blame for the defeat as he believes his team lacked preparation.

Tampa Bay accounted for 23 first downs while Philadelphia was only able to muster 14. In addition, the Eagles committed three turnovers while the Bucs had none.

Tampa Bay also won the time of possession battle with 33:03 time in possession oppose to Philadelphia’s 26:47

Is Jalen the Answer?

After the crushing defeat, Philadelphia has major questions that need addressing this offseason. Considerably, the quarterback situation may be the biggest as Jalen Hurts struggled mightily in the wildcard lost.

Hurts connected on 23 of his 43 passing attempts, for one touchdown and two interceptions. Even with such a disappointing performance, Hurts is expected to remain the starter and has remained optimistic.

In his second year in the NFL, Hurts threw for 3144 yards, 16 touchdowns and nine interceptions. His stats were good enough to secure the Eagles a wildcard spot, but is it enough to identify as a franchise quarterback?

According to Head Coach, Nick Sirianni, the Eagles believe in their quarterback.

If Philadelphia, like most teams, wish to make a realistic playoff run, they will need efficient quarterback play from their quarterback. The best quarterbacks in the game step up their performances in the playoffs and Hurts must do the same.

Even with the embarrassing defeat in the first round of the NFL playoffs, Philadelphia still sees this season as a success.

There were multiple times throughout the season where Philly looked like true contenders on both sides of the ball. Leading the league in rushing yards this season, the Eagles will continue to lean on their run game to set up the passing game next year.

They were 12th in the league in terms of points scored a game with 26.1.

On the defensive side of the ball, Philadelphia finished the year ranked 9th in total yards.

With Hurts still at the helm and a dominating run game, Philadelphia will continue progressing next season using this humiliating loss as motivation.