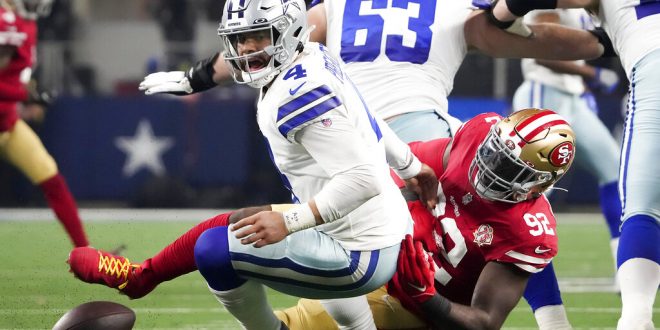 The Dallas Cowboys’ long journey to the playoffs ended in heartbreaking fashion on Sunday evening. The team’s late surge in the fourth quarter fell short of victory in the game’s final drive. However, the 23-17 loss was not taken well by Cowboys’ fans. People in the stadium were seen throwing trash on the field as players and referees dashed away.

#Cowboys fans throwing things at their own players. Got this sent to me by one. Be better fans wow! pic.twitter.com/mlVttbFlpg

The uproar after the game can all be attributed to the result of the final play. The Cowboys were trailing by six with just over 30 seconds left in the game. Then, they managed to move the ball downfield to San Francisco’s 41-yard line. Dallas had 14 seconds to make it into the end zone, when Quarterback Dak Prescott ran for 17 more yards. With nine seconds and no timeouts remaining, the Cowboys scrambled to stop the clock by setting the ball up for a snap. At the same time, umpire Ramon George rushed downfield to spot the ball and collided into Prescott. Unfortunately, time expired before Dallas was able to get out a snap and the game ended.

After the game, Prescott says he was confused why the umpire hit him. He says he knew George would spot the ball, but he’s struggling to accept the way it happened.

Additionally, Prescott expressed his disappointment with the result of the play. He says they practiced it before and believed there was time to make it work. Now, Prescott says his team will prepare for unexpected situations in the future.

Next For the Cowboys

Now, the Cowboy’s season has officially ended and they will turn their focus to next year. Entering the offseason, Dallas is hoping to maintain their valuable staff members. Cowboy’s VP Stephen Jones assured Mike McCarthy’s position as head coach. He says he is “very confident” McCarthy will lead the team next season.

Also, defensive coordinator Dan Quinn might not stay with the Cowboys. Quinn is accredited with transforming the Cowboy’s defense. He is planning to interview with five teams for next season. Another popular contender is offensive coordinator Kellen Moore. He is behind the offense that lead the NFL in scoring and total yards. Both of these coaches are valuable members of the Cowboy’s staff. Therefore, their presence in next season will be very impactful.

Moreover, the Cowboy’s salary cap might make a difference in the roster next season. Big name players like Amari Cooper and Tyron Smith might not stick around with limited salaries. Dallas’ staff will have to work hard to keep their players, as well as connect with potential draft picks. Maintaining vice president of player personnel Will McClay may help the Cowboys get a team that can make it through the playoffs next season.