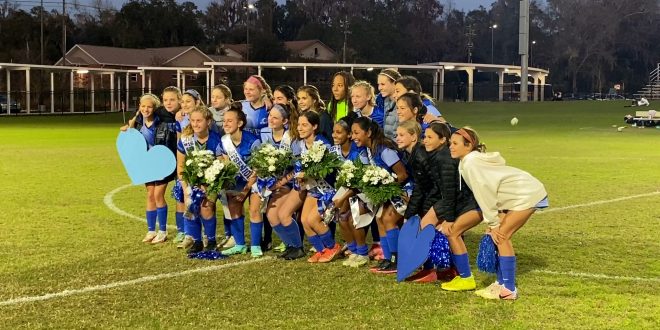 On a brisk Tuesday evening in Gainesville, the P.K. Yonge Blue Wave played host to the Williston Red Devils in a short-lived girls soccer contest that lasted just one regulation half. The Blue Wave made quick work of the Red Devils, scoring early and often in a 9-0 win behind a hat trick from senior Karuna Leslie.

A blowout for @pkyongedrs !!! Game ending in 9-0 against Williston before half!

This marked the eighth instance in 12 games where the Blue Wave scored at least seven goals in one match. Even with their decisive victory, it was an emotional senior night for P.K. Yonge. Leslie and five other upperclassmen were given a proper send-off post-game as their high school careers begin to draw to a close.

At the conclusion of the first (and only) half and with the mercy-rule triumph secured, the team’s underclassmen gathered together at mid-field to create a tunnel for the seniors to walk through with their parents.

Adorned with senior sashes, Leslie, Tes Berelsman, Abi Patterson, Livia Mendez, Juliana Holsbeke and Sally Schackow were showered with cheers from their teammates as they were announced one by one. There wasn’t a dry eye in the house as the team came together to create one final night of memories.

Although tears were unavoidable, the ceremony brought many smiles and much-needed laughter for the soon-to-be graduates and their loved ones.

Holsbeke, who has attended P.K. Yonge since Kindergarten and played for the varsity soccer team for six years, expressed gratitude for the time she has spent with the Blue Wave.

“I have made so many memories with these girls. Playing with them has been amazing. At P.K., there is a special connection with this team that is always going to be there,” Holsbeke said.

The families of seniors and non-seniors alike came prepared, presenting the hard-working graduates with personalized “FatHeads” (oversized cardboard cutouts of their faces), bouquets of white daisies and many other decorations to create a more personalized evening.

“I am so proud of [my players] and so very happy for them,” head coach Rebecca Schackow said.

“I have a senior on the team (Sally Schackow) and I have been the coach of all the seniors in this group for their entire high school soccer career here. This is a very special group of young women and it’s hard to imagine a year without them. Six seniors graduating is a lot. We are just trying to appreciate each moment that we have left with them, do the best we can, make a ton of great memories, and just enjoy it.”

With back-to-back district championships under her belt, Schackow believes that the best is yet to come for her squad, especially since playoffs are just around the corner.

On the keys to a successful playoff run, Schackow mentioned the players having confidence and trusting in their teammates so they can focus on creating scoring chances and not forcing any plays, instead of allowing them to unfold naturally.

Leslie, a captain, commented on the faith she holds that the rest of the season will continue to play out in P.K. Yonge’s favor, despite some of the tough competition they are sure to face in the playoffs.

“Our team has improved so much already throughout the season, and I think we are going to make it really far with all the hard work we have been putting in.”

With this win in the penultimate game of the season, the Blue Wave record improves to 10-1-1. P.K. Yonge has one final test remaining on its regular-season schedule, a home match against Florida State University High School. The kickoff is set for 5:00 p.m this Friday, Jan. 21.