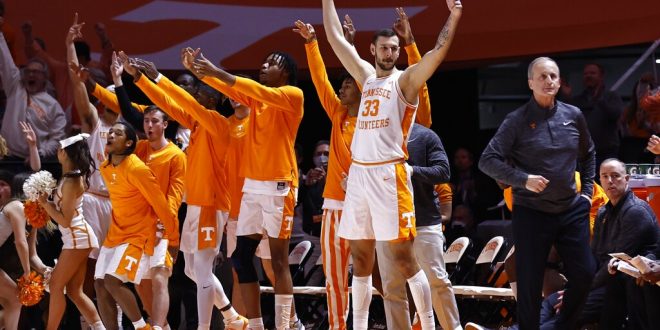 Tennessee forward Uros Plavsic (33) and his teammates react to a 3-point shot during the second half of an NCAA college basketball game against Florida, Wednesday, Jan. 26, 2022, in Knoxville, Tenn. Tennessee won 78-71. (AP Photo/Wade Payne)

In a matchup between two prideful defenses, The Texas Longhorns (15-5) will host the Tennessee Volunteers (14-5) this Saturday at 8PM.

The Longhorns currently have the number one scoring defense in the country while Tennessee comes in at 39th. This game is expected to be a defensive battle with this being the strong point of both squads.

However, both teams come into the matchup winning seven of their last ten and on current winning streaks.

While the Volunteers come into this game winning their last three games, they are 2-3 when traveling on the road.

On the other hand, the Longhorns boasts one of the best home records in the country at 12-1.

After their 78-71 win over SEC foe Florida Gators, the Volunteers sit at 5-3 in SEC play.

all them teeth, but no toothbrush. pic.twitter.com/ytnsLMIYDj

The Longhorns also have a 5-3 conference record, after winning their last two against Big 12 opponents.

In a matchup that is expected to be close, the advantage goes to Texas as they attempt to defend their home court when the two square off Jan. 29.

The focus of this Longhorn team is on the defensive side of the ball. Texas allows the least amount of points per game in the country at 54.7.

They are also ranked top five in both field goals attempts allowed per game and field goals per game.

Their method of winning is to limit the amount of shots their opponents take a game.

Relying on slow pace and strong defensive rebounding, Texas opponents rarely are given a second chance to score.

On the offensive side of the ball, Texas leans on their more experienced players as three seniors average double digits for the team.

Senior, Timmy Allen averages the most point for this Longhorn squad with 12 PPG.

If Texas wants to win this game they must continue to control the time of possession and play at their pace as they have been doing so effectively at home.

In order for the No. 18 ranked Tennessee Volunteers to win this game, they must overcome their poor road performances.

Tennessee has been a much different team on the road compared to at home according to their 2-3 record on the road.

When playing at home, the Volunteers have a record of 12-2. The Volunteers are led by junior guard, Santiago Vescovi who averages 14.6 PPG.

Freshmen Kennedy Chandler is the Volunteers second best scoring option at 13.5 PPG. Chandler is also one of the most feared defenders on this deep Volunteers team.

KC for DPOY.@KChandler_1 has been named to the 15-man watch list for the @NaismithTrophy Defensive Player of the Year.

The Volunteers biggest strength is also limiting scoring opportunities for their opponents as they rank 39th in the country for points allowed.

Giving up a measly 63.1 PPG, Tennessee hopes to shutdown an average Longhorn’s offense when they travel to Texas.

If Tennessee can pull off a tough road win against Texas, it will immensely help their push to reach the college basketball tournament.