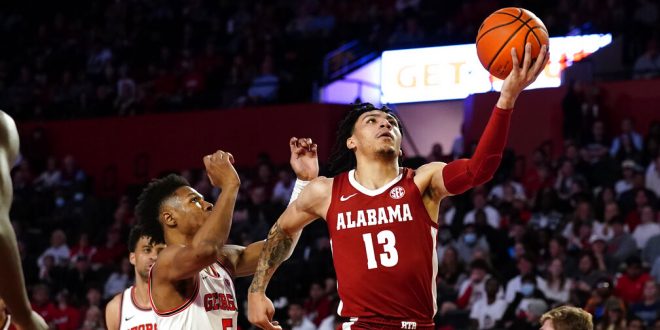 Alabama Crimson Tide (13-7) looks to upset the No. 4 Baylor Bears (18-2) in a college basketball showdown this Saturday in Tuscaloosa.

Baylor enters this matchup on a three-game winning streak and the No. 4 team in the nation according to the new AP poll. The Bears have suffered two losses all year and they have both come in the last month.

They are the betting favorite but they come to the home of a talented Crimson Tide team. Alabama opened up the year the No. 14 ranked team in the country. Their year hasn’t gone as planned as they sit at 13-7 and unranked.

One thing Alabama has done well this season is defend their home court. They have a record of 9-1 when playing in Tuscaloosa and they take on a Baylor team that is undefeated on the road this season. Alabama is exceptional at home and Baylor is perfect on the road, but one of those things will have to give in this matchup.

Alabama Has Upset Before

This season Alabama has played five ranked opponents. In these matchups they have gone 4-1, beating Gonzaga, Houston, Tennessee and LSU. Gonzaga was the No. 3 team in the nation, Houston was 14, Tennessee was 14 and LSU was 13 when they played Alabama.  The only ranked team the Crimson Tide have lost to this season is Auburn, who are know ranked the No. 1 team in the nation.

With their success at home and ability to play up to their competition, it could be the perfect storm for Alabama to surprise many on Saturday.

Players To Watch and Team Strengths

For Baylor, two players to watch are guards LJ Cryer and James Akinjo. Cryer and Akinjo lead the team in scoring with 13.9 and 13.2 points per game respectively. Akinjo also leads the team with 5.6 assists per game and 2.2 steals per game.

For Alabama, guard Jaden Shackelford leads the way for the Crimson Tide averaging 17.1 points per game. Guard Jahvon Quinerly helps run the show with 14.3 points per game and 4.3 assists per game.

If Alabama wants to compete in this game, they will have to get in a groove offensively. They average 81.1 points per game as a team compared to Baylor’s 78.7. While also out rebounding Baylor per game with 40.4 compared to the Bears 38.2 per game.

Will the Crimson Tide offense pull through at home or will the Bears defense give Alabama fans headaches in Tuscaloosa? We will see on Saturday at 4 p.m. ET.