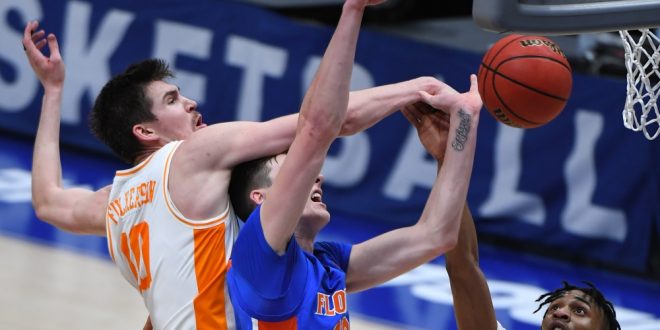 The Florida Gators (12-8, 3-5) fall to the No. 18 Tennessee Volunteers (14-5, 5-3) as the Vols use a big second half to escape with a win. Some questionable calls down the stretch helped Tennessee come out with the victory. Nonetheless, the Gators drop back-to-back games after a three-game winning streak

Tyree Appleby led the way for Florida with 16 points and seven assists. Even though he was effective on offense, he turned the ball over five times. Santiago Vescovi was the go-to man for Tennessee finishing with 23 points on 6-10 to go along with five triples.

Coming off Monday’s loss to Ole Miss, Florida’s offense looked much better out the gates scoring 42 points in the first half. Still, it was the three-ball that decided the game with Florida finishing 10-33 (30.3%) from deep while the Vols shot 11-24 (45.6%). Here’s how the game went down.

Florida’s Kowacie Reeves opened the game with a three just for Santiago Vescovi to answer right back for the Volunteers. Vescovi hit another three early on which forced the Gators to take the first timeout of the game as Tennessee led 8-5.

Some more back-and-forth and this one was a high-scoring affair early on. After a poor shooting night for the Gators in their last game, Tyree Appleby hit two deep threes going into the first media timeout. Appleby also recorded two steals early on.

The Gators continued to shoot the ball well early in the first half going on a 15-0 run which included two Brandon McKissic threes and some stout defense. Florida led 23-10 going into the second media timeout.

After a six minute scoring drought for the Volunteers, Tennessee went a 11-0 run of their own which included a Zakai Zeigler block, two threes and five points from Kennedy Chandler.

Reeves hit a deep three to end Tennessee’s run just for the Volunteers to answer right. Some more scoring on both sides and the Gators led 28-24 going into the third media timeout.

Some missed buckets on both sides coming out of the timeout and Myreon Jones intercepted another pass and recorded an and-one. Phlandrous Fleming Jr. hit his first basket of the game with a corner three to extend Florida’s lead. Another Fleming bucket and the Gators held a 12-point lead towards the end of the first half.

A little bit more back-and-forth and the Gators took a 42-34 lead into halftime. Vescovi led all scorers with 14 first half points including 4-5 from deep. In this first half, Tennessee was out-rebounding the Gators 20 to 10 but Florida holds a 12 to three turnover advantage.

Both teams came into the second half with some more intensity on the defensive end. The Volunteers forced back-to-back turnovers cutting Florida’s lead to just three going into the first media timeout.

Up just one, Appleby hit a contested three to get the offense going for the Gators just for Vescovi to respond with a three of his own.

Going into the second media timeout, both squads upped the defensive intensity. The Volunteers scored in consecutive possessions to take their first lead since the score was 10-8 on a Vescovi layup.

The game of runs continued as Tennessee went on a 11-2 run themselves and led 65-59 with just over six minutes to go. A Jones three for the Gators and forced turnover and Florida found themselves down three.

After a three-point play by John Fulkerson, the Vols were up six with under four to play. He was the go-to man for Tennessee down the stretch finishing with nine points and three blocks.

The Gators looked to be chipping away at this one but some questionable calls by the referees led to Tennessee free throws. Florida continued to fight though with an Appleby corner three. Despite this, the Vols held on at the end and would win the game by seven.

Well, this will be a tough one to swallow for the Gators who lead by double digits for much of the first half. Florida dropped its last two conference games after going on a three-game winning streak.

The Gators will welcome in Oklahoma State this Saturday in the SEC/Big 12 Challenge. Florida will look to go on another run of games after coming into this week as the last team in according to Joe Lunardi’s Bracketology.