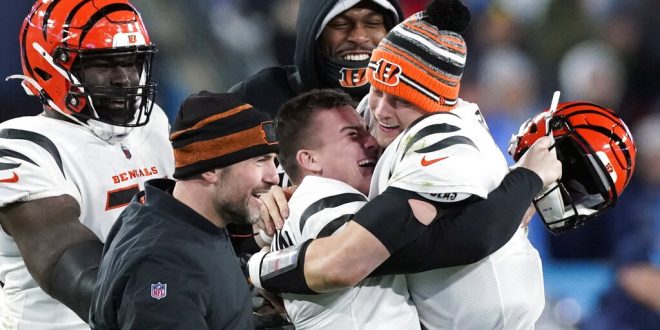 Former Gator, Evan McPherson has been great for the Bengals this season. He’s made 11 field goals from 50 or more yards, including last week’s game-winning 52-yarder against the Titans. That 52-yarder is why the Cincinnati Bengals are in the AFC title game for the first time in 33 years.

Breaking Down the Rematch

Both teams have dominant offenses and the battle for the conference championship is sure to be an exciting game to watch with the Patrick Mahomes and Joe Burrow matchup.

Per the Elias Sports Bureau, Cincinnati quarterback Burrow is the sixth player to enter a conference championship game with 50-plus sacks, and his 62 are easily the most. Burrow finished the season with a 70.4 percent completion percentage, 4,611 passing yards, 34 touchdowns and 14 interceptions.

Bengals receiver Ja’Marr Chase wrecked the Chiefs when they played in the regular season. During the game, Chase racked up his stats by catching 11 passes for 266 receiving yards and three touchdowns.

On the Chiefs side of things, Mahomes has been playing for the Chief’s for five years, while Burrow has only been around for two. During the game against Cincinnati game in the regular season, he threw 259 yards and completed about 75% (74.3 CMP%) of his passes. In comparison, Burrow threw over 400 yards that game.

It hasn’t been long since the teams have seen each other, but the last meetup was a victory for the Bengals. All in all, both teams are strong offensively, but the Bengals have a stronger defense. With the Chief’s safety, Tyrann Mathieu’s out for the game due to a concussion it puts their defense at a deficit.

The winner will advance to the Super Bowl, which takes place on Feb. 13.