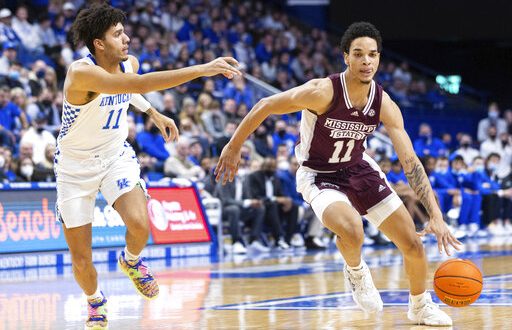 This Saturday marks the annual SEC/BIG12 challenge in men’s college basketball. The SEC and BIG12 have a combined nine teams ranked in the top 25, giving college basketball fans some great matchups. We will see the unranked Mississippi State Bulldogs (13-6) travel to Lubbock, Texas, to take on the No. 13 ranked Texas Tech Red Raiders (15-5). Both teams are coming off tough losses. The Bulldogs lost to the highly talented Kentucky Wildcats on Tuesday, while the Red Raiders were heartbroken by the Kansas Jayhawks on Monday.

The Red Raiders have had a great season so far with notable victories against Kansas, Tennessee and Baylor. Their offense and defense have both been fluid all season under Mark Adams’ first year as head coach. A player that has been really important to this Red Raiders team is junior Kevin McCullar. He is currently one of the 15 players on the Naismith Defensive Player of the Year Watch List.

McCullar’s presence on the defensive side has put pressure on some of the nation’s most talented guards. His in-game focus sparks his teammates to compete just as hard. The Red Raiders’ junior leads his team in rebounds, assists and steals, making him a force on both sides of the ball. If they play their normal tough brand of basketball, the Red Raiders should come out on top.

Can Mississippi State pull off the upset?

Mississippi State is having a winning season so far, being ranked sixth in the SEC. The Bulldogs will be put to the test against a tough Texas Tech team. The biggest piece for the Bulldogs is junior guard Iverson Molinar. Molinar has had an incredible season for the Bulldogs so far. The junior has been averaging 18.4 points and 4.3 assists per game, leading his team in both categories. His ability to score at will against some tough SEC defenses has been quite impressive.

In this week’s overtime loss to Kentucky, Molinar put up an astonishing 30 points to keep the Bulldogs in the game and into overtime. In Saturday’s game, the Bulldogs need to look to get the ball into Molinar’s hands and allow him to set the offensive tempo. With an efficient offense and a tough defensive effort, the Bulldogs could walk away with an upset victory over the Red Raiders.

Crucial game for both teams

With both teams looking to make it back into the win column, it’ll be a can’t miss game. Texas Tech is looking to maintain their spot in the top 25 rankings. Opposingly, Mississippi State is eyeing a really impressive upset win. This cross conference matchup is set to tipoff  at 5 p.m. on Saturday and will be broadcasted live on ESPN2.