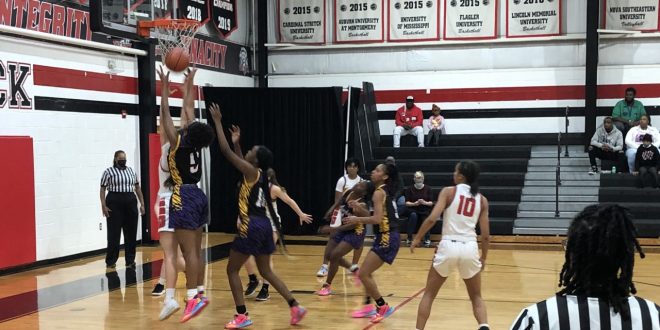 Columbia Makes The Rock Fight for Their Victory

Columbia’s girls varsity basketball team did not make it easy on The Rock Saturday night. Although the Lady Tigers lost 61-54, they made The Rock struggle for their victory. At the beginning of the game, the team’s cohesiveness and communication were nonexistent. As they neared the end, the team had this fire and determination to not go down without a fight.

The Tigers started strong offensively, taking advantage of any mistakes the Lions made despite lacking defensively. They always seemed to be one step behind and let simple offensive maneuvers slip right past. “That is a tribute to us not being competitive enough,” said head coach Anthony Perry. “Not coming out on fire and ready to go.”

During halftime, the coaches strategized and decided to change their approach. “I went to the coach and said to go to a full-court press,” stated assistant coach Erica Mayo. “He was willing to do it, so we adjusted, and the girls did well at adjusting on the court. It got us back into the game.”

Thair strategic decisions worked to their benefit. They managed to narrow the gap and only be six points behind The Rock at the end of the third quarter. As you watched the girls play, you could see their determination shine through the way they moved, especially in freshman Eriel Baker’s outstanding performance.

“She hasn’t played a lot of minutes throughout the season, but she came in and gave us a lot of energy on defense,” stated Mayo. “She had six steals, knocked down some key steals, got some key rebounds, and knocked down her free throws when on the stretch.”

The Tigers may have lost this battle, but this game served them well. With another match approaching quickly, head coach Perry is planning on working on their competitive edge in all areas of the game, especially in making sure their defense is solid. On Feb 2 at 6 pm, Columbia has a neutral playoff game versus Fleming Island. A game that is a part of the district tournaments, determining who moves on to the championship.