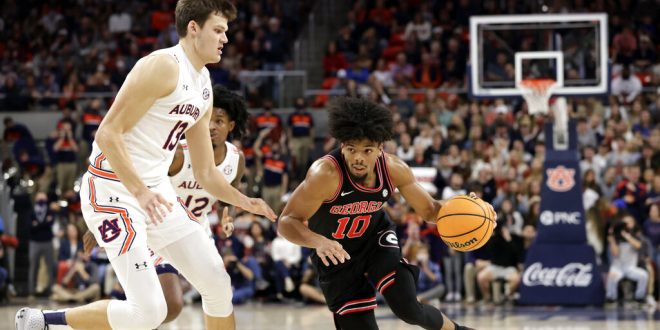 Georgia guard Aaron Cook (10) drives to the basket around Auburn forward Walker Kessler (13) during the first half of an NCAA college basketball game Wednesday, Jan. 19, 2022, in Auburn, Ala. (AP Photo/Butch Dill)

South Carolina and Georgia’s men’s basketball teams will meet for an SEC matchup on Saturday at 2 p.m.

The Bulldogs have lost 13 of their last 15 games, and have not won a game since Jan. 25. Despite posting a winning record last season, Georgia’s record sits at 6-18, while they are just 1-10 in SEC play.

Sixth-year “super senior” Aaron Cook provides a glimmer of hope for the Bulldogs. After contributing to Gonzaga’s National Championship runner-up finish last season, Cook headed to Georgia in hopes to secure a starting position. The St. Louis, Missouri, native leads the team in assists (5.9 apg) and is the third-leading scorer (10.6 ppg).

Florida Southwestern State transfer Kario Oquendo has suprised many. Despite coming from a junior college, the 6 foot 4 shooting guard has seamlessly adjusted to the physicality of the SEC. Oquendo is the Bulldogs leading scorer (13.8 ppg) while also serving as a defensive force, leading the team with 12 total blocks this season.

The Gamecocks hold a 13-10 record and are 4-7 in SEC play. The Gamecocks have lost their last three games, sitting as the 11th ranked team in the SEC.

Led by Frank Martin, the Gamecocks opened the season with an 8-2 record before six players tested positive for COVID before the team’s rivalry game against Clemson. Since then, the team has won just five of their last 13 games.

Redshirt Jermaine Cousinard serves as the team’s most versatile player. The 6 foot 4 guard is the team’s leading passer and third leading scorer. Despite nursing an ankle injury, the team leans on Cousinard late in games on the defensive end as he typically is matched against the opposing teams leading scorer.

Senior Erik Stevenson is the team’s leading scorer, but the shooting guard is not putting the ball in the basket at an efficient rate. The University of Washington transfer’s field goal and three point percentage dropped from the previous season.

True freshman Devin Carter has stepped up while earning valuable playing time this year after the illnesses to his fellow teammates. Carter had high expectations as his four-star ranking made him South Carolina’s highest rated 2021 recruit. The Miami native is averaging 8.4 points per game and is tied with Reese James for the team lead in steals.

While South Carolina’s record won’t turn heads yet, the Gamecocks have the coaching staff and veteran prowess to recreate their pre-COVID success.

Tyler Carmona is a junior journalism major at the University of Florida. Originally from Miami, Tyler played football as a wide receiver at the University of St. Francis before transferring to UF.
@@TylerCarmona
Previous Commissioner Roger Goodell: “NFL Fell Short By A Longshot”
Next Eastside Rams Clinch a Spot at the Regional Semifinals in 3-2 Victory Against the Suwannee Bulldogs 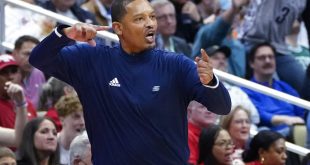 South Carolina is expected to hire Chattanooga’s Lamont Paris on a five-year deal this week, …