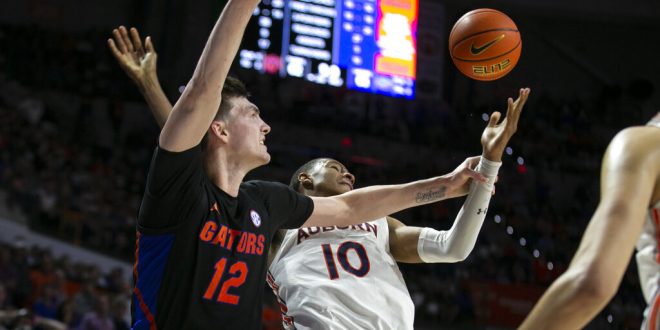 Florida Takes on Another Ranked Opponent at Home

Coming off their biggest victory of the season, Florida Gators Men’s basketball now have their sights on No. 18 Arkansas back in the O’Connell Center. Florida knocked off the second-ranked Auburn Tigers 63-62 on Saturday. The win strengthens the Gators chances in a possible birth to the NCAA Tournament when selection rolls around Sunday.

The Tigers were the highest ranked opponent the Orange and Blue sent home packing at the O’Dome. The win cost the university $50,000 in fines as the Gators faithful stormed the court, celebrating in dramatic fashion.

The Gators are now in a four-way tie for fifth place in the conference. As the regular season dwindles, conference wins become more crucial as teams fight for seeding in the SEC Tournament which will take place in Amalie Arena in Tampa.

Although, shooting their third-worst percentage, a mere 36.5% on the season, Florida made seven of 13 3-point jumpers in the second half. The tandem of Tyree Appleby and Colin Castleton was just enough to get past the Tigers. Appleby scored a team-high 26 points. While, the 6-foot-11 forward added 19 with eight rebounds and three blocks.

The Orange and Blue survived an ill-advised turnover late to come up with one defensive stop as the final buzzer sounded off.

On the year, Castleton leads the team in scoring averaging a near double-double with 15.2 points and snagging 9.1 rebounds per game.

However, Florida will have to repeat Saturday’s performance against the Razorback as Arkansas also knocked off the Tigers just days earlier.

Just 10-days prior, the Razorback took down the big bad wolf in the SEC, Auburn. Behind guard JD Notae’s 28 points, Arkansas defended Bud Walton Arena with an 80-76 win in overtime, giving the Tigers their first lost in conference play. Jaylin Williams and Au’Diese Toney combined for 27 points and 21 rebounds.

Now, sitting in third in the conference standings, the Razorbacks have won 11 of their last 12 games including a win against Tennessee in their last outing. Williams had a monster game on the glass as he tallied a game-high 16 rebounds to go along with his 13 points in their win against the Volunteers.

For Tuesday, the Razorbacks look to get their first win in Gainesville since 1997.

For the series, The Gators have the advantage leading 26-13 all-time. Including, winning 11 of the last 13 matchups. In the last matchup, Florida overcame a 15-point deficit in the first half to walk away with the 75-64 victory.