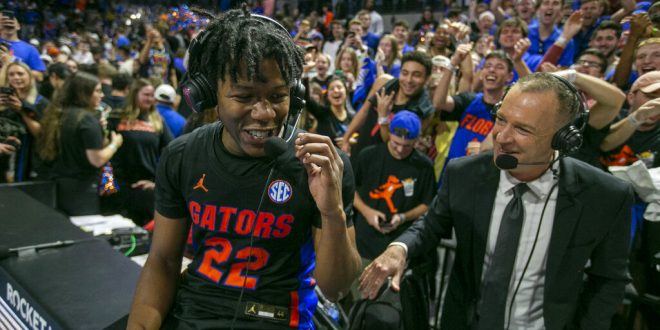 The Florida Men’s basketball team keeps its NCAA Tournament hopes alive by beating the number two Auburn Tigers Saturday in the O’Connell Center. The Gators knock off the Tigers 63-62.

In a hard fought defensive struggle, Auburn had a chance to win as they got the ball back with just under 10 seconds left in the game but the Gators did a great job defensively and did not allow the Tigers to get off a potential game winning shot.  UF turned it over a couple times late, but played good enough defense to overcome its mistakes.

Florida now has a marquee win on their resume that can propel them back inside the NCAA Tournament bubble. They had fallen out of the mock NCAA Tournament bracket of just about everyone but this win changes all of that, at least for now one would believe.

Tyree Appleby led the way for Florida with 26 points while Colin Castleton added 19 as those two players scored 45 of Florida’s 63 points on the day.

The game was a struggle offensively for both teams as the Tigers and Gators shot 40% and 37%, respectively from the field.  The win marks the highest-ranked opponent Florida has beaten in program history. Florida now sits at 17-10 and moves to 7-7 in SEC play.

Appleby and Castleton Lead the Way

The Gators needed their big names to step up in this one and they came through in a big way.

Colin Castleton was absolutely fantastic even while matching up with two starts in Jabari Smith and Walker Kessler. He added eight rebounds to his 19 points and shot 7 of 13 from the field. Very importantly, he shot 5 of 7 from the line, which is a strong number for him.

He was also tremendous defensively and had three blocks and two steals. Castleton held his counterpart, top-15 prospect Walker Kessler, to just 11 points and three rebounds. The Deland native helped get Kessler into foul trouble which prevented him from having a big impact on the game late.

Appleby is known to be a pure shooter and gets streaky at times, but he was feeling it on Saturday. Appleby was 5 of 10 from three and shot 7 of 8 from the free throw line.

He also came up clutch late, making his final five shots including a three late that extended the lead to eight. The eight-point lead proved to be too much for Auburn as they cut it to one, but could not finish it off.

20 of Appleby’s 26 points came in the second half, including four of his five threes.

The Gators opened up some big leads on Auburn and the Tigers seemed to always have an answer. A 22-14 lead in the first half was Florida’s biggest of the game, but Auburn cut it to just a point at the half.

Auburn started the half on fire and opened up a nine-point lead of their own as Jabari Smith, the likely number one overall pick in June’s NBA draft, began to take over. He scored 10 of the Tigers’ first 12 points in the second half and it seemed like he was putting Auburn well on their way to victory.

However, the Gators answered by slowly chipping away. They cut the lead down multiple times before Auburn opened it right back up, but the Gators stayed the course.

The demons of the Texas A&M game began to linger as the Gators got sloppy late in the game. They fouled Smith on a three-point attempt and turned it over a couple times. Their sloppiness allowed Auburn to get the game within a point and it seemed like Wednesday night all over again.

However, Florida locked in for one more defensive possession and got the job done. They did not even allow Auburn to get a real shot off on the final possession.  How big a win was this?  Some Gator fans actually stormed the court after the victory!

The Gators will look to carry the momentum from this big win into Tuesday night’s matchup against Arkansas at home.