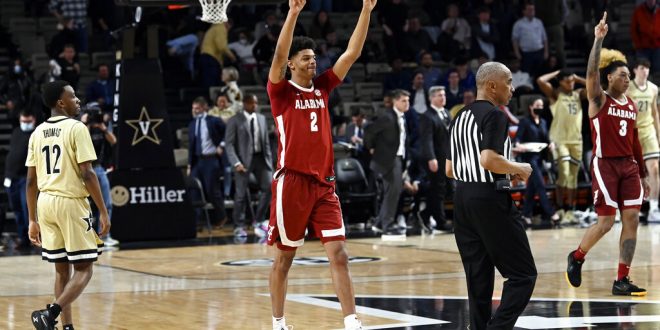 The reigning SEC Champions slipped past the Commodores after they led by 11 with 5:23 remaining. The win marked UA’s third consecutive win inside Memorial Gymnasium in Nashville, Tennessee.

Davison, a freshman, recorded a double-double with 10 points and 10 rebounds on the night, the first of his career. Meanwhile, Quinerly, a junior, totaled 19 points for the crimson red and white.

“For us to beat a team that had won four straight SEC games here at their home and in a place that Alabama has historically struggled to get wins, I thought this was a big character win for us,” Oats said.

The Commodores all-out effort failed to be enough as they fell within the final seconds of the game. Guard Scotty Pipen Jr. recorded 26 points to challenge the Crimson Tide.

The junior scored 20 or more points in the last four games. In order to help the home team stand its ground at Memorial Gymnasium, Pippen sank five straight free throws to make the score 71-70, bringing Vanderbilt within one late. With 438 total, he claims the sixth-most made free throws in Commodore history.

Eighteen of the last 19 games played between the Southeastern Conference opponents have been decided by 10 or fewer points.

The Crimson Tide returns to Tuscaloosa, Alabama, Saturday for Senior Day to face the South Carolina Gamecocks. On the other hand, Vanderbilt travels to Starkville, Mississippi, Saturday to battle the Mississippi State Bulldogs.