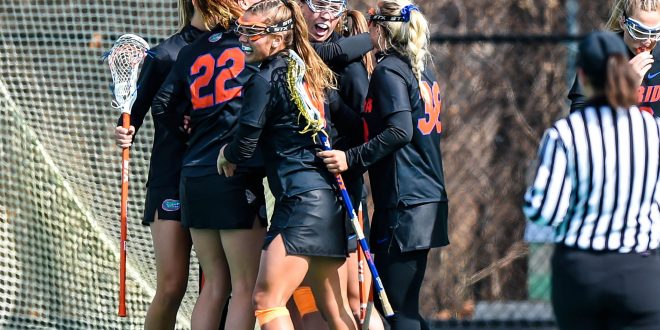 Danielle Pavinelli scores her fourth goal of the match against Maryland.

Gators Lacrosse suffered their second straight loss to a IWLCA top five team Saturday. Respectively, Florida has now lost to No. 2 North Carolina and No. 4 Maryland, moving to 1-2 on the season.

Surely, the Terps had all the momentum heading into the fourth quarter with a 17-6 lead. Although the Gators would score two goals to come within nine, Maryland scored the last goal of the game to make it 18-8. Now, the Gators drop to 1-6 in the all-time series against Maryland.

Sophomore Danielle Pavinelli led the way for the Gators scoring four goals. Also, she led the way in the draw circle for Florida with a career high of three.

Junior Emily Heller scored three goals for the Gators to help lead the way. Additionally, Ashley Gonzalez scored one goal early in the second quarter trimming the lead to just five. Indeed, Maggi Hall had three assists in the game as eight Gators each registered a groundball.

Redshirt sophomore Sarah Reznick  posted a team high four groundballs, just one shy from her career high. Furthermore, she posted a season high 14 saves on a .438 save percentage. Now, she has recorded a save in 32 straight games and is tied for the third longest steak in program history.

The Florida Gators look to bounce back as they take on fourth-ranked Stony Brook Saturday here in Gainesville. Opening draw is set for 10 a.m.