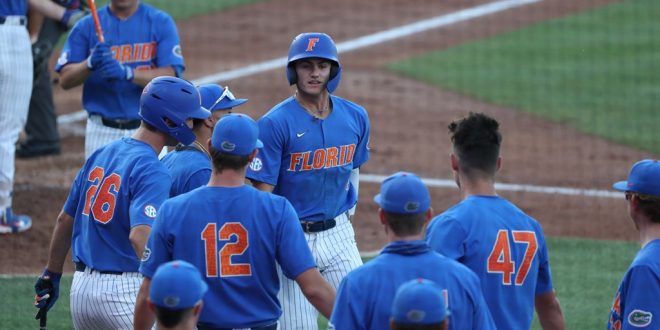 The Gators started Hunter Barco on the mound in the first game against Seton Hall. He did not allow a run in his six and 1/3 innings of work. Barco gave up two hits and struck out six on the day.

While he threw the six and 1/3 innings, he definitely could’ve gone longer. He only threw 74 pitches on the day before being relieved by Karl Hartman.

Hartman entered the game and gave up four runs in only one and 1/3 innings before being taken out of the game. He would be replaced by another freshman, Anthony Ursitti.

Ursitti would close the game for the Gators. Overall, he gave up one hit, three walks, one hit-by-pitch with two strikeouts.

Florida ended up winning 16-4 in game in one.

The Gators started Brandon Sproat for the second game against Seton Hall on Saturday. Sproat got into trouble early allowing two runs in the first inning putting the Gators in an early deficit.

However, over the next five innings he would only allow one run and finish with the win. His final numbers before being pulled were six hits allowed with five strikeouts, one walk and three earned runs allowed  in a total of six innings.

Standout-reliver Blake Purnell would come in after Sproat. Purnell threw the next two innings without allowing a run in either inning. Purnell then gave way to Carsten Finnvold.

Finnvold struggled pitching in the ninth. He came in with a comfortable eight run lead, but would give up six runs in the ninth alone, bringing the game to 11-9. Brandon Neely would come in to relieve the struggling Finnvold.

After sweating it out in the ninth, Neely ultimately sealed the win 11-9 by retiring the final two batters of the game to get his first save of the season.

Despite positive outings from his starters in each game, O’Sullivan knows the bullpen needs to get outs, and was not too happy with all the performances on the day.

Florida Batters Work the Opposition in Both Games

In the first game Saturday the Gators had the bats firing. They had 15 hits.

The hits were not the only thing impressive from the batters in this game either. They drew seven walks and were hit twice, adding up to nine free passes, which is always a good thing for any offense.

Although Florida only had three runs in the first four innings, they scored a grand total of 11 runs in the fifth and sixth innings. They were not done there, as in the eighth inning they added a final two runs to push their total to 16.

Wyatt Langford went three-for-four with five RBIs. Three of the RBIs came from his home run hit in the fifth.

In addition to Langford’s performance, another player for the Gators had a good day at the plate. Jud Fabian went two-for-three with three RBIs. Fabian also eclipsed the 100 RBI mark in his career in the first game.

When asked about his career milestone, he did not even know he had hit it.

While Florida found themselves down heading into the bottom of the first, it would not be too long before the took the lead.  The Florida offense scored one run in the first and then put up four in the third, which gave them a 5-3 lead.

After taking the lead they would not relinquish it, as the Gators scored six runs in the next five innings of the game to win 11-9.

For the second game, Jud Fabian led the Gators in RBIs. He hit another home run as well.

More specifically, it brought his brother, Deric Fabian, around the bases. Which is always a good feeling for big brother Jud.

Overall, Florida finished with eight hits, 10 walks and four hit batters in the second game of the doubleheader.

Finishing off the Weekend

Florida finishes off the series Sunday at noon against Seton Hall, looking for a sweep of the series.