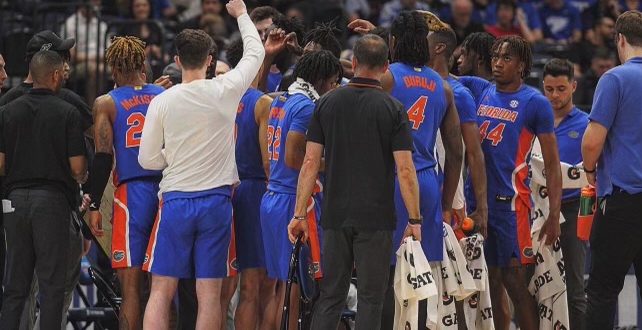 In a crushing overtime defeat, the Florida men’s basketball team heads back home after just one outing in the SEC Men’s Basketball Tournament.

Down by as many as 16 points in the first half, Florida’s late rally was not enough to push them past Texas A&M. The Aggies defeated the Gators 83-80 on Thursday to advance to the quarterfinals.

Another Tough Loss Late for Florida

It didn’t seem like it was going to be much of a game early, but ticket holders at the Amelia Arena in Tampa certainly ended up getting a big bang for their buck. Thursday’s match up was a telling sign that March Madness is approaching.

Like in their last match up in conference play, a last three-point shot was the story in this one. However, the Aggies ended up sealing the February 19th victory behind three free throws.

But, in this game, with 0.4 seconds left in overtime, Texas A&M capitalized on another opportunity against the Orange and Blue.

Hassan Diarra came off a screen at the top of the key and launched from deep.

Just like that, Gator fans everywhere stood in disbelief as Diarra hits a game-winner. The 3-pointer was the final nail in the coffin for any NCAA Tournament hopes for the Gators.

“It was planned for me. Coach drew it up the play in the timeout,” Diarra said. “He knew that my man would tag Henry on the roll and I will be open on the shake-up.”

Off the bench, Diarra tallied 14 points shooting 3-for-4 from 3-point range. Henry Coleman III lead the way for the Aggies scoring 22 points and eights rebounds.

For Florida, the likelihood of reaching of the NCAA Tournament seems unlikely. Already on the bubble, dancing on Selection Sunday was a big “if” entering Thursday’s match up. Now, with the loss, Florida goes back to drawing board.

For the first 38 minutes, Florida seemed to have no answer defensively for the Aggies. Texas A&M started the game hot including a 13-0 run with 8:33 left in the opening half.

Unfortunately, the Orange and Blue couldn’t find themselves offensively. Florida shot a mere 1-for-9 from three-point range and gave away eight turnovers.

The Gators found themselves back in the game overcoming their rough shooting performance to start. While the Aggies relied most of their focus on slowing down Colin Castleton, it provided an opportunity for other Gators to step up.

Niels Lane had a career day with 16 points and nine rebounds.

Also, freshman Kowacie Reeves unleashed a scoring surge that the Gators desperately needed, especially with guard Tyree Appleby not having his most productive showing.

Reeves became the focal point for the Gators at the end of the regulation to push them into overtime. The young freshman led the team with 21 points including a four-point play to cut the Aggies deficit to just one. Also, with under a minute left in regulation, Reeves scored on a three-point shot to tie the ball game at 70, sending it to overtime.

In overtime, Texas A&M withstood the late rally from the Gators as both team traded blows. But, the miraculous game-winner by Diarra stole the show.

Now, Texas A&M will look keep their NCAA Tournament chances alive as they look to upset top seed Auburn on Friday. This will be Auburn’s first outing in Tampa. Tip between the Aggies and the Tigers is set to begin at noon.

For the Gators, an up-and-down season continues but not the way Gator fans hoped for entering the year. With the loss, this will be the first time since 2015-16 under coach Mike White Florida will not be dancing on Selection Sunday; if they indeed miss out on the tournament.

Instead, Florida may have to turn its attention to the NIT.