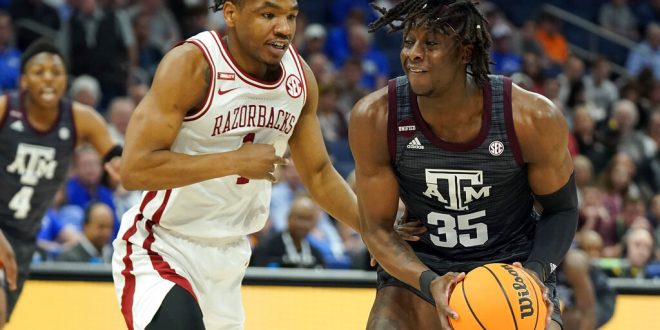 Texas A&M guard Manny Obaseki (35) tries to go inside on Arkansas guard JD Notae (1) during the first half of an NCAA college basketball game in the semifinal round at the Southeastern Conference tournament, Saturday, March 12, 2022, in Tampa, Fla. (AP Photo/Chris O'Meara)

Arkansas Set for First Round Test Against Vermont

The Arkansas Razorbacks (25-8) begin their road to the Final Four Thursday against the America East Champion Vermont Catamounts (28-5).

Despite being a small school, Vermont has had a history of playing higher ranked teams close in the tournament. In 2005, the No. 13 ranked Catamounts upset four seed Syracuse. In 2019, the team fell just short of another upset over a four seed, losing to Florida State by six points. Vermont dominated the America East tournament, defeating its opponent by 32 points or more in its last three games played.

Despite an early exit from Arkansas in the SEC tournament, the Razorbacks are a real threat to make a run in March, but could still be on upset alert.

Keys for the Catamounts

The Catamounts had another successful regular season and conference tournament, losing only five games. The team has won eight straight games and 22 of its last 23 games with most coming in dominant fashion. The team averages 74.9 points per game and loves to shoot the three. Almost half of its field goal attempts are three-pointers, and it shoots 36.4% from behind the arc. If it wants to succeed against a strong defensive team like Arkansas, it has to shoot the three well.

Additionally, Vermont likes to play slow-pace basketball. Arkansas loves to run the court, ranking No. 28 in the country in pace of play. The Razorbacks struggled against Colgate in the first half of its first round game last season in the tournament, but turnovers allowed the Razorbacks to run the court and get easy baskets. Arkansas ended up winning by 17.

Arkansas has one of the deepest teams in the NCAA, consisting of four players averaging over 10 points per game. JD Notae was one of the best players in the SEC this season, earning a spot on the first team of the All-SEC team, averaging 18.4 points per game. Notae is a threat when running in the open court along with his elite quickness to easily get himself to the basket for open shots.

Arkansas made a run to the Elite Eight last season, but ultimately fell to the top seeded Baylor Bears by nine points. The team had regular season success in the SEC, and if the team plays to its strengths, it could make a deep run in hopes of making it to NOLA for the Final Four.

Previous No. 3 Tennessee vs. No.14 Longwood NCAA Preview
Next Gators Men’s Basketball host Iona in the First Round of the NIT Tournament 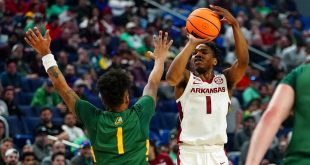