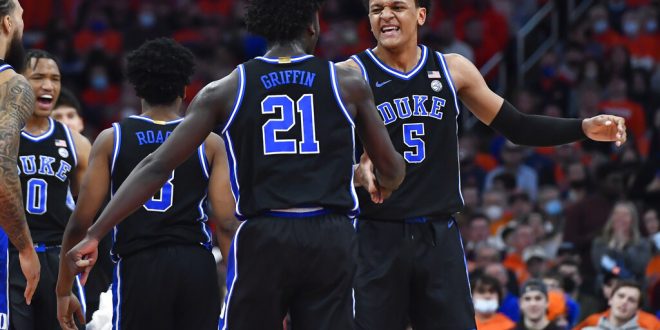 Now, a spot in the championship game is on the line. No. 8 seed North Carolina will be the underdog versus the No. 2 seed Duke (32-6) team stocked with NBA draft picks like Paulo Banchero, Mark Williams and A.J. Griffin.

An upset on Saturday would spell the end of Duke head coach Mike Krzyzewski’s coaching history as he will retire. Coach K won all five Duke titles, including most recently in 2015. Winning a final title would be a fairytale ending.

Coach K has led Duke since 1980. Meanwhile, UNC head coach Hubert Davis is in his first year as head honcho. The former Roy Williams assistant spent much of the season on the tournament bubble. Back on Feb. 5, the Tar Heels lost 87-67. But the win to spoil Coach K’s final home game cemented his team’s spot in the tournament.

Strong performances from Armando Bacot and Jacob Love were the key differences between the Feb. 5 87-67 loss and March 5 win.

Hubert, the first African American to lead the UNC men’s basketball program, made rounds on Twitter for the care he expressed for his players after the Elite Eight victory over St. Peters.

UNC coach Hubert Davis overcome with emotion as his team celebrates a trip to the Final Four:

"I just desperately wanted this for them. I love these guys so much." pic.twitter.com/7ueZOn0eW4

He now goes for the first Tar Heel title since 2017.

It will be interesting to see the ratings for this historic game. Around the country, fans, celebrities and politicians alike are expressing excitement for the big game.

North Carolina Gov. Roy Cooper made a proclamation declaring his state as the center of the college basketball universe.

North Carolina is ᴏꜰꜰɪᴄɪᴀʟʟʏ the center of the college basketball universe. pic.twitter.com/6XIiSkoqaF

Below are some players to watch for, along with tournament results so far for each team:

When: Tipoff is set for Saturday at 8:49 p.m. following the conclusion of two-seeded Villanova versus one-seeded Kansas.

Channel/Website: The game will air live on TBS and stream through NCAA.com.