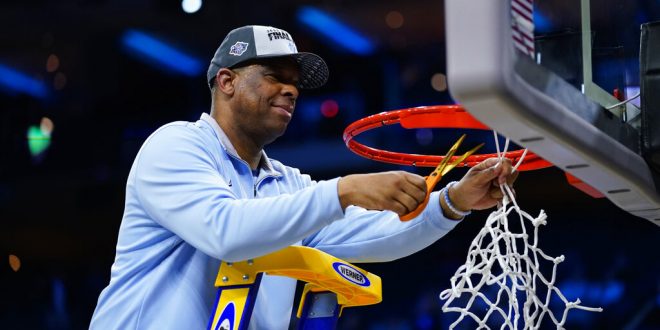 UNC when they saw people backing up Saint Peters over them… #MarchMadness pic.twitter.com/rpeRLEdHB6

The Tar Heels defeated Virginia, Virginia Tech, Marquette, Baylor and UCLA to get to their least expected matchup; Saint Peter’s. Notably, Saint Peter’s is a small Division I school in Jersey City. They went 22-12 in the regular season and therefore were the 15-seed coming into March Madness. If someone said that Saint Peter’s would be in the Sweet 16, let alone the Elite Eight, they would have been considered crazy. In their March Madness run, the Peacocks defeated big names schools like Kentucky, Murray State and Purdue. Surprisingly, the Peacocks defeated Purdue on National Peacock Day. On the other hand, the Tar Heels went 28-9 in the regular season. UNC was the 8-seed coming into March Madness this year.

UNC vs. Saint Peter’s First Half

The Tar Heels got the opening tip and took an early 9-0 lead. Although Saint Peter’s closed the gap to make it 12-7, UNC took off making it 21-7 with just over 7 minutes left in the first half. The first half concluded with UNC up 38-19. UNC has not lost a game this year when up at halftime.

The Tar Heels essentially owned the rest of the game. They went on a 5-0 run to start the second half. The score gap was between 15-20 points the majority of the second half. Armando Bacot had several easy buckets towards the end of the game to extend UNC’s lead even more. It was 67-42 with 2:27 left in the game when there was a sudden momentum switch. After a layup by Saint Peter’s, UNC tried inbounding, but KC Ndefo got the steal and drove it to the paint for 2. Another successful 3-pointer was made by Saint Peter’s. The Peacocks went on a 7-2 run to end the game. Although a great final effort, it was not enough for a win.

Even though they fell short, Saint Peter’s made history along the way.

They proved the seeds and rankings may not be as important as we think. Their March Madness run is a real-life