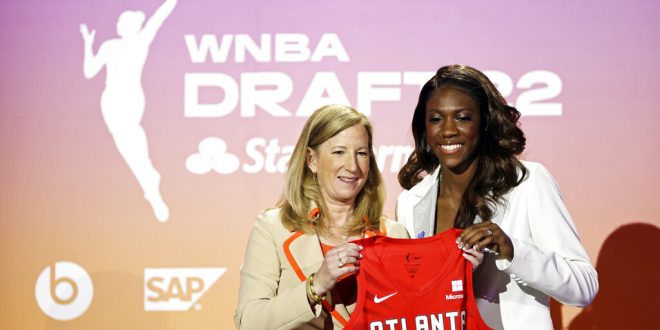 Kentucky's Rhyne Howard, right, poses for a photo with commissioner Cathy Engelbert after being selected by the Atlanta Dream as the first overall pick in the WNBA basketball draft, Monday, April 11, 2022, in New York. (AP Photo/Adam Hunger)

The WNBA draft was in person in New York City for the first time since the beginning of the COVID-19 pandemic. Through three rounds, 12 teams selected a total of 36 eligible athletes.

While the Washington Mystics won the 2022 WNBA draft lottery, they traded their number one overall draft pick to the Atlanta Dream. In return, the Mystics received the No. 3 overall pick, No. 14 overall pick, and rights to swap 2023 draft picks.

For the No. 1 overall pick, the Atlanta Dream selected Rhyne Howard. As a freshman, the shooting guard from Kentucky was SEC freshman of the year and earned the distinction of All-SEC first team. Then, she earned the SEC Player of the Year two years in a row, as a sophomore and junior. In her senior season, Howard led the Wildcats in points, rebounds, three-pointers, steals, and blocks.

With this selection, Howard became the first No. 1 overall pick in Kentucky women’s basketball history.

NaLyssa Smith, a power forward from Baylor, went No. 2 overall to the Indiana Fever. Smith feels she has been “slept on” during her career despite expecting to be drafted either first or second overall. However, she is excited to prove herself within the program.

Shakira Austin, a 6-foot-5 center from Ole Miss, was selected No. 3 overall by the Washington Mystics. Austin is familiar with Washington D.C. She attended high school in Maryland and started off her collegiate career at the University of Maryland.

Austin will aim to bring “competitive energy” to the Mystics.

Emily Engstler, a power forward from Louisville, was selected No. 4 overall by the Indiana Fever. Engstler is a versatile player, who has a passion for defense.

Emily Engstler: “You’re good at things you love to do and I love to play defense.”

In the final round of the draft, Florida guard Kiara Smith was selected by the Connecticut Sun with the No. 36 overall pick.

With this pick, Smith became the 19th Gator selected in the WNBA draft. Most recently, Ronni Williams was selected by the Indiana Fever in 2017.

After transferring from ASA College in New York, the guard played three seasons with the Gators.

Smith left her mark during her time in Gainesville. She ends her collegiate career 12th in total points scored, with 1,508. Also, she sits fifth in free throws, fifth in total steals, and fourth in total assists for Florida.

The 2022 WNBA season is set to begin on May 6 with four matchups.