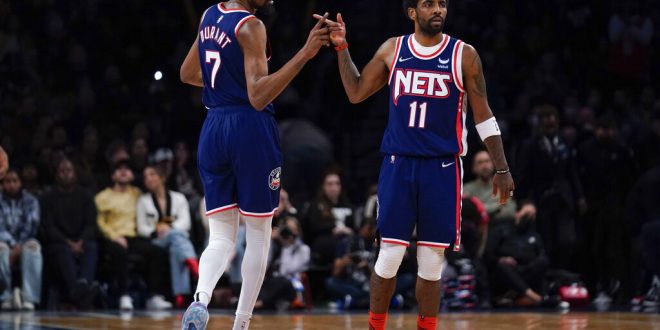 Brooklyn Nets' Kyrie Irving, right, and Kevin Durant celebrate after a basket during the second half of an NBA basketball game against the Indiana Pacers at the Barclays Center, Sunday, April 10, 2022, in New York. The Nets defeated the Pacers 134-126. (AP Photo/Seth Wenig)

When the NBA season began, nobody could have guessed the Brooklyn Nets would be in the play-in games. But after a season of turmoil, trades and vaccine statuses, here they are; facing off against the Cleveland Cavaliers for their playoff lives.

The Nets (44-38) enter as the seven seed, and as a result get to host the Cavs (44-38) at Barclay’s Center. Both teams enter the game shorthanded, with Brooklyn missing forward Ben Simmons, and Cleveland without center Jarrett Allen. Without Allen, the Cavs are limping into the playoffs, finishing the season 3-7 in their last 10 games. Meanwhile, the Nets are beginning to find a groove with Kyrie Irving back full time, winning six of their last 10.

It has been a wild season to get to this point, especially for Brooklyn, but before we get there let’s take a look at how the play-in works. This is the second year the NBA has had play-in games, and the format may be a bit confusing.

There are four teams that will participate in the play-in game, and three total games will be played. Tuesday’s game between the Nets and Cavaliers determines who gets the seventh seed and plays the second seed Boston Celtics. The winner of Tuesday’s game is automatically in, and the loser gets another chance to save its playoff life.

Before that, the ninth and tenth seeds will face off. That game, between the ninth seed Atlanta Hawks and tenth seed Charlotte Hornets, will be Wednesday night. The loser is automatically eliminated. The winner still has to pick up another win before it can join the playoff party.

The third game of the play-in then sets who gets the eighth seed and faces the Miami Heat. The loser of the 7-8 game faces the winner of the 9-10 game and the winner faces the Heat.

Coming into the season, the Nets were one of the favorites to win the Eastern Conference. They boasted one of the best rosters in the league, headlined by the trio of Kevin Durant, Irving and James Harden. On paper, it was going to be smooth sailing for the Nets during the regular season.

Of course, controversy emerged right away surrounding the vaccination status of Irving. Brooklyn’s star point guard began the season only allowed to play in road games due to New York City’s vaccine mandate.

Then, they ran into problems with Harden who began to express frustration with his situation. After just 44 games in the season, the Nets decided to move on from Harden after they acquired him last year. They shipped the star shooting guard to Philadelphia in exchange for Simmons, who has yet to play a game in his new uniform. There is no love lost from Philly fans for Simmons.

Not to mention that Durant only played 55 games this season, missing six weeks due to a sprained MCL. Add all that up and in the time those three all spent in Brooklyn, they played just 16 total games together. It was a complete failure of an experiment, and has landed the Nets in a spot they never thought they’d be in: fighting for their playoff lives in an elimination playoff.

Still, they have the advantage in nearly any series they play in. They certainly have an advantage in a one-game playoff against a team like Cleveland. Any time a team can run Durant and Irving out on the floor, it has the upper hand. Even if it advances and faces off against the Celtics or Heat, it will still likely be the favorite in either series.

It has been a wild ride for the Nets this year, but they can easily salvage it with a deep playoff run. If they do not, there will be a lot of questions to ask in the offseason.

The Cavaliers were one of the big surprises in the league this year and getting into the playoffs is a big accomplishment. Despite that, it feels like a bit of a disappointment that they ended up here based on how the season started for them.

At the All-Star break, the Cavs sat at third in the Eastern Conference with a 35-23 record. They have gone just 9-15 since and slipped all the way into the play-in game. Even up until March 25 they were still in position to avoid the play-in, but their slide to end the season without Allen doomed them.

Cleveland is a very young team, lead by an underrated young star in Darius Garland. He is averaging 21.7 points and 8.6 assists this year on 46.2% shooting at just 22-years-old.

The Cavs are deep as well, with nine players averaging double figures, but none more than Garland’s 21.7. Without Allen, it will be Garland and fellow guard Collin Sexton who will have to carry the load. Cleveland has some good forwards, but it may just not have the star power to match up with Brooklyn.

This game presents a tough challenge for such a young team, but it has not backed down to any challenge all year. It should be a fun matchup when it faces off against the Nets in Barclay’s Center Tuesday.

You can see the action on TNT at 7 p.m., followed by the Western Conference play-in between the Timberwolves and Clippers at 9:30 p.m.