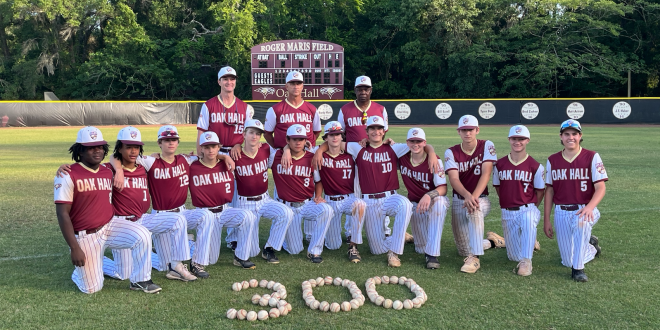 On Friday afternoon, the Oak Hall Eagles baseball team had a pretty good day. The team finished off their regular season with a 10-0 mercy-rule victory over the Eastside Rams. From their impeccable pitching to another top-notch performance at the plate, Oak Hall controlled this one from start to finish. The win also improved the Eagles’ record at home this season to 7-0. The Eagles finished the regular season with an undefeated record at Roger Maris Field for the first time in recorded school history.

Oak Hall also celebrated another major milestone following their win over the Rams. Eagles Head Coach Kevin Maris secured his 300th victory as a head coach. Following the win, the school celebrated with balloons that spelled out “300” and multiple commemorative items.

An alumnus of Oak Hall himself, Maris previously served as the Eagles head coach from 1997 to 2008. After a stint with the Saint Francis Catholic Wolves, Maris returned to Oak Hall prior to the 2020 season. In his postgame remarks, Maris cited how far he has come with the Eagles since he joined their staff over three decades ago.

“To [get the 300th win] here at Oak Hall, and to do it on the field named after my dad, is memorable for me,” Maris said. “There was a guy named Mac Hall that I was an assistant coach under back in 1990. He asked me to come be an assistant coach for him. I told him ‘I’ll help out, but I don’t want to dress out…’ Next thing I know, he wanted me to get in uniform and be on the field.”

As for the game on Friday itself, the Eagles got a big boost from Jack Kuzmicki’s phenomenal performance. Kuzmicki drove in 3 runs and went 3-for-3 at the plate, including his third inside-the-park home run of the season on a perfectly hit ground ball. He also got the start on the mound, and he did not disappoint whatsoever.

In 5 1/3 innings pitched, Kuzmicki gave up four hits, no walks and no runs while throwing three strikeouts. Ethan Szlachetka relieved Kuzmicki during the sixth inning. Szlachetka pitched 2/3 innings, throwing out two strikeouts to wrap things up on the mound. He allowed no hits and two walks.

Harrison Beach and Aaron Akins each picked up two hits; the latter’s performance gave him his first multi-hit game with the Eagles’ high school team. Additionally, Beach and Andrew McManis scored three runs each on the day. As a unit, the Eagles finished with six stolen bases total. Neil Ruth led the team with two stolen bases early on in the game.

Emory Ezzell and Troy Freeman also both drove in two runs during Friday’s game. Ezzell’s came off of a 2-RBI single in the fifth inning. Freeman drove in one run via a sacrifice ground ball in the third inning. His other RBI came off a walk-off triple in the sixth inning.

The Rams nearly jumped out to an early lead in the top of the first inning. After picking up a pair of singles in their first two plate appearances, one Eastside runner made it to third base on a fielder’s choice. During the following at-bat, another Eastside runner stole second base. The Rams now had two runners in scoring position with only one out in the inning.

Thomas Shay stepped into the batter’s box for Eastside. The count sat at 3-1 as Shay belted a line drive down the left field line. However, before the ball even had a chance to land fair, Freeman made a diving grab to stop the ball and secure it in his glove. Freeman immediately bounced back up and attempted to tag the runner at third out.

A fantastic grab from Troy Freeman helps the Eagles keep the Rams off the board in the top of the first inning. Oak Hall will now look to respond with some offense of their own in the bottom half. pic.twitter.com/k8ZL2B41as

While the runner made it back safely, the crowd still went crazy about Freeman’s grab that picked up another out for Oak Hall. A ground out in the ensuing at-bat prevented the Rams from putting any runs on the board. Freeman credited some hard work behind the scenes that enabled him to make the play.

“I think it’s really the practice that does it,” Freeman said. “It’s just a habit that I get into, and I really want to stop anything that comes my way as a third baseman.”

Kuzmicki Dominates At The Plate Once Again

The Eagles knew they had an opportunity to strike in the bottom of the first inning. They took advantage of it in a big way. Eastside struck out Jackson Beach and walked Harrison Beach to start the inning. With one out on the board and a runner on first, Jack Kuzmicki pulled off a bizarre (yet extremely impressive) trick play.

After letting the first three pitches sail by to put the count at 3-0, Kuzmicki knocked a hard ground ball right over the head of Eastside’s second baseman. The ball made it all the way from a bounce in the infield to the center field fence. As Eastside’s outfield struggled to chase down the ball, Kuzmicki sailed into home plate. He had just knocked out his third inside-the-park home run this year. The Eagles now led 2-0.

Make that THREE inside-the-park home runs for Jack Kuzmicki this season! A perfectly hit ground ball soars over the Eastside infield and makes it all the way to the outfield fence. Kuzmicki’s third homer of the year has the Eagles leading 2-0 after one inning of play. pic.twitter.com/JCvZwIrpcZ

Interestingly enough, two of Kuzmicki’s home runs this season have come against Eastside. However, he shrugged this off as a coincidence. However, he did acknowledge that he has been pleased with his performances against the Rams this season.

“That’s just luck of the draw,” Kuzmicki said. “Every day I’m trying to do my best, and it just so happens I’ve been clutch against them.”

Kuzmicki continued his hot streak into the later innings of the game as well. After a scoreless second inning for the Eagles, Kuzmicki drove in another run on a deep line drive into left field. McManis went on to pinch run for Kuzmicki after his big hit; he eventually found his way home to increase Oak Hall’s lead to 4-0 after three innings of play.

At the end of the third inning, the Eagles are up 4-0 over the Rams. Another blast from Kuzmicki turns into an RBI double as he brings Harrison Beach home. Troy Freeman drove in Andrew McManis (the pinch runner for Kuzmicki) on a sacrifice ground ball two at-bats later. pic.twitter.com/5tooyXrOix

Closing The Rams Out With Ease

As the game went on, the Eagles only further asserted their dominance over the Rams. After allowing three hits in the first two innings, Kuzmicki went on to only allow one hit in his final 3 1/3 innings on the mound. With the Rams’ offense essentially neutralized, the Eagles continued adding on to their lead in the later innings.

The Eagles immediately loaded the bases in the bottom of the fifth inning. A pair of singles from Harrison Beach and Kuzmicki, along with a walk for McManis (who had replaced Ruth in the lineup) put Oak Hall in a perfect position to tighten their grasp on this one. After a strikeout from Freeman, the Eagles inadvertently scored one run after the Rams walked Szlachetka.

Their next at-bat, however, was no accident. After Kuzmicki scored on a wild pitch, Ezzell blasted a line drive into left field that allowed Beach and McManis to score. At this point in the game, the question shifted from “Can the Rams come back?” to “Can the Eagles get a mercy rule?”.

Eagles takeover alert! A beautiful hit from Emory Ezzell drives in a pair of runs for the Eagles to extend their lead. After scoring a pair of runs off of a walk and a passed ball earlier in the inning, Oak Hall now leads 8-0 at the end of the fifth inning. pic.twitter.com/bDTsk6o0MD

The answer to the latter question ended up being yes. Kuzmicki started off the sixth inning on the mound with a pop out. Maris and the coaching staff decided to make multiple defensive substitutions following the play, resulting in Szlachetka taking over on the mound. Despite giving up a pair of walks, Szlachetka also picked up a pair of strikeouts to continue Oak Hall’s shutout.

With a potential mercy rule looming, the Eagles offense continued to execute their gameplan to perfection. While Eastside picked up a pair of outs early on in the bottom of the sixth inning, they also walked both Jackson Beach and McManis. Freeman entered the batter’s box knowing that one well-hit ball could seal this one for good.

Two pitches into the at-bat, Eastside’s catcher gave up a passed ball that Beach managed to score on. McManis ended up making it over to third base, setting up Freeman for an easy walk-off. Freeman ended up going above and beyond the call of duty, blasting out a powerful hit into centerfield that nearly cleared the fence. He ended up with a triple. Soon after Freeman made it over to third base, the official signaled for the mercy rule. Eagles win. Again.

Officially Preparing For The Postseason

With the 2022 regular season officially in the books, the Eagles will now shift their attention to their Districts Tournament. Oak Hall has clinched the 1-seed in the Class 2A District 4 bracket. Their next game will take place on May 3. The Eagles will play host to either Peniel Baptist Academy or Countryside Christian in their District Semifinals matchup. The winner will play in the District Championship on May 5.

With an extremely talented roster, an experienced coaching staff and home-field advantage throughout the tournament, the Eagles’ odds of taking home a Districts title look mighty favorable. The team plans to stay grounded and focus on whatever opponents they may face in the coming week. However, Akins reaffirmed his confidence in his squad’s abilities to make some noise down the road.

“This team is amazing,” Akins said. “It’s pretty hard to beat us.”

Jack Meyer is a first-year student at the University of Florida. He is majoring in Journalism and specializing in Sports and Media.
@jackmeyerespn
Previous Hawthorne Softball Lays A New Foundation
Next Heart Of A Champion: An Inside Look At How Ethan Szlachetka Has Become A Star For Oak Hall Baseball