The Florida Gators Baseball team celebrates with Wyatt Langford (36) during a game against the Georgia State Panthers on Feb. 26, 2022. (Photo by Jordan McKendrick, Floridagators.com)

Gator baseball, currently on a four-game winning streak, hope to carry this momentum into their midweek game this Tuesday against Bethune-Cookman.

The Gators took out their brooms sweeping Mississippi State over the weekend. After a successful weekend against an SEC rival, the Gators have brought their 2022 season record to 29-18. With only two SEC series left for the Gators, they continue to fight for a spot in Regionals.

Breaking Down the Matchup

Florida is now getting ready for their next matchup. They’ll face Bethune-Cookman for the second time this season a midweek game. On March 22, the Gators won the first game against the Wildcats, 3-2.

Coming off recent wins, the game this Tuesday should be one you don’t want to miss. On paper, the Gators are the heavy favorites hitting overall .275, compared .235 for B-CU.

This game could be Deja-vu to the previous faceoff of the two; a victory for the Gators thanks to a walk-off home run in the bottom of the ninth inning. Not only this, but Florida’s outfielder Jud Fabian dominated the Wildcats with two home runs the last time the two faced one another, leaving Fabian and his teammates with big shoes to fill for Tuesday’s game.

The Florida Gators edged the Bethune-Cookman Wildcats last night in a 3-2 midweek matchup.#Gators CF Jud Fabian homered twice in the win and now leads the club with 10 dingers on the season.

With pressure to continue their winning streak and domination over Bethune-Cookman, the Gators look to remain on top after their midweek game and hopefully bring their record one stop closer to a better chance advancing in their season. 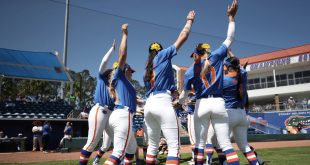