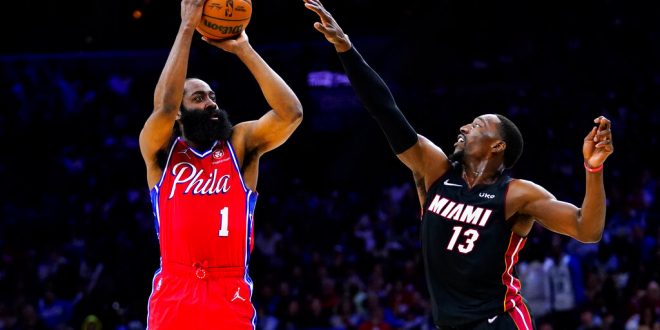 Philadelphia 76ers' James Harden (1) goes up for a shot against Miami Heat's Bam Adebayo during the second half of Game 4 of an NBA basketball second-round playoff series, Sunday, May 8, 2022, in Philadelphia. (AP Photo/Matt Slocum)

Harden’s 31 Points Turn Down the Heat

The Philadelphia 76ers evened up the series at two apiece against the Miami Heat, Sunday night. The 76ers, led by a vintage James Harden performance, rallied in the closing minutes to extend their lead.

Even Battle to Start

For the first 19 minutes of the game, neither Miami nor Philadelphia led by more than four points. This was until Sixers guard James Harden took over, creating points in various ways to end the half. In the final five minutes of the first half, Harden scored 10 points to go along with two assists. This helped Philadelphia create a comfortable eight-point lead heading into the second half. 76ers head coach Doc Rivers highlighted Harden’s ability to put points on the board, whether it be through his shooting or his passing.

Following a hot streak to end the second quarter, the 76ers extended their lead to 11 points early in the third. However, this large lead did not last long. Heat Forward Jimmy Butler strongly led the Heat back within striking distance, scoring seventeen of his forty points in the third quarter alone. With Butler on fire, the Sixers now led the Heat with a narrow lead of four points heading into the fourth quarter.

Harden Takes Over the Fourth

Although Harden’s scoring numbers are not as elite as they were a few years ago, he gave fans flashbacks of his old self at the end of this crucial game four. Harden began the fourth quarter with an assist and two free throws to put Philadelphia up nine points. The Sixers star guard then made a three pointer to extend Philadelphia’s 12 points, but he was not done there. Harden would go on to score 16 in the quarter, including two crucial three pointers in the final three minutes of the game. It was this type of performance by Harden which the 76ers were hoping for when they traded for him. Sixers Center Joel Embiid knows what his second-hand man is capable of, and that he has a meaningful purpose for the team.

What’s Next for Miami and Philadelphia?

After the Sixers evened up the series in Philadelphia, the Heat will look to take back control of the series in the next game. Game five is scheduled to tipoff at 7:30 p.m. on Tuesday night in Miami. If the Heat are going to regain momentum in the series, they will have to contain James harden. Luckily for the Heat, they have home court advantage in game five, and if needed, game seven.