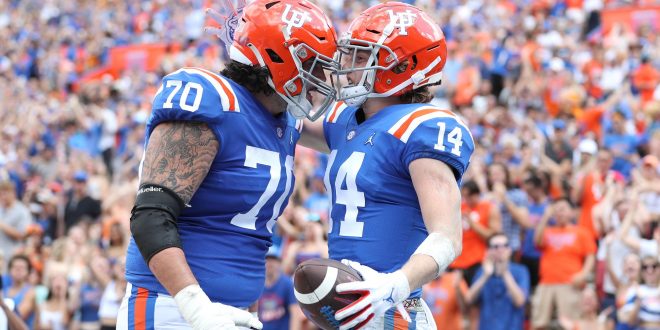 Gators wide receiver Trent Whittemore sat down with Steve Russell on Sport Scene to discuss the everchanging landscape of college football, along with the team’s transitioning of coaching personnel.

Whittemore did not travel far and wide to reach the swamp grounds of Ben Hill Griffin Stadium.

A Gainesville native, Whittemore attended Buchholz High School, where he played multiple positions and started on the varsity team as a freshman.

The redshirt sophomore committed to the Gators back in 2019 as a defensive back, but eventually converted over to wide receiver. Having appeared in two games in 2019, he redshirted and did not find himself on the stat sheet until 2020.

Over the past two seasons, Whittemore has collected 29 receptions for a total of 338 yards and 2 touchdowns. Having played under center in high school, he has also thrown 2 touchdown passes.

Whittemore detailed two major changes in college football that have taken place following his arrival with the Gators.

The first one is the one-time transfer exception the NCAA now permits collegiate athletes to exercise. The new rule designed to allow more freedom for disgruntled student-athletes has now become chaos. Transfer portal applications are flying off the shelves as college football has essentially adopted free agency.

The second major breakthrough is NIL, in which student-athletes can now profit off of their name, image and likeness. Legislation and regulations are still very much up in the air as student-athletes continue to monetize.

Whittemore believes it is only fair that players, especially the stars, receive more compensation for generating millions of dollars for people other than themselves.

With Billy Napier leading the show as head coach at Florida, Whittemore expressed his excitement. However, he admitted having some difficulty getting adjusted due to the team’s unfamiliarity with Napier.

Whittemore praised Napier’s ambitions, stating that from the moment he stepped in he had an agenda in place.

Earlier this month, the Gators’ 2023 class picked up a commitment from Creed Whittemore, the younger brother of Trent.

Creed currently plays quarterback at Bucholz, but his collegiate position is undetermined.

Although Creed toured other Power Five schools across the country, Trent knew in the back of his head that his younger brother would follow suit and remain in Gainesville.

Just like Trent Whittemore and the rest of the Gators football team, fans will have to adjust seeing a new man sporting the headset along the sideline.

The Billy Napier era begins on Sept. 3, when the Gators host the Utah Utes.