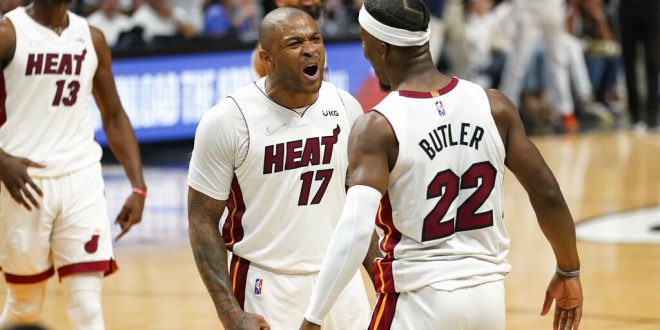 Miami Heat forward P.J. Tucker (17) and forward Jimmy Butler (22) celebrate during the second half of Game 1 of an NBA basketball Eastern Conference finals playoff series against the Boston Celtics, Tuesday, May 17, 2022, in Miami. (AP Photo/Lynne Sladky)

Although the Jimmy Butler and Miami Heat were down by eight by half time for game 1 of the Eastern Conference finals, Tuesday night’s game ended in a 118-107 victory for the Heat over the Celtics. Miami Heat are up 1-0 for this best of seven series.

Main Takeaways for the Heat

The third quarter is where the Heat started to pick things up offensively and turned the game around in their favor. The Heat made a postseason high 30 free throws and surpassed their postseason average of 11 fastbreak points with 13.

Jimmy Butler was as a standout competitor for the Heat. By the end of the game, Butler had scored 41. 27 of those points were scored in the second half. This is Butler’s second 40-point game in the postseason.

Down eight points at halftime, the Heat needed a spark to pull out the victory. The break at the half was a big turning point.

It all changed at halftime.

Miami HEAT basketball was on full display after that. pic.twitter.com/FWHOIkw1ro

Tyler Herro was a very important component in the second half as he helped keep the Heat close to the Celtics. Herro scored 18 for the Heat.

#6MOTYLER was key in keeping us close in the first half pic.twitter.com/XYIAVb12Pn

From the beginning Boston was missing two starting players, Marcus Smart and Al Horford. However, they were leading the entire first half. The score at halftime came to 62-54.

Jaylen Brown made 24 for Boston and Jayson Tatum added 29 for the Celtics. Payton Pritchard and Robert Williams III both scored 18 individually.

Celtics center Robert Williams III says the team needs to “be ready to fight” if they want to win the next game.

Rob Williams: "We just gotta come together, correct the mistakes, and be ready to fight. That’s what it comes down to."

On Thursday, the Heat and the Celtics will meet back up for Game 2 of this series.