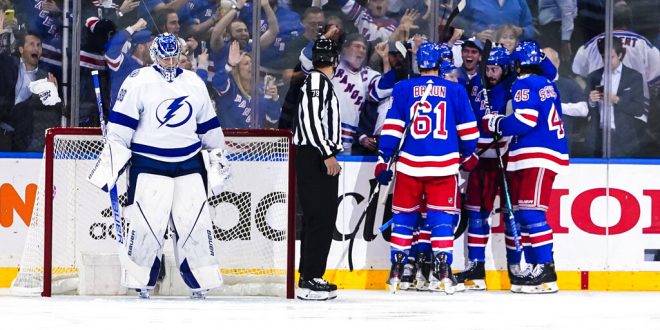 The Rangers take game one of the Eastern Conference finals against the Lightning.

The Rangers mopped the floor with the lightning in a 6-2 blowout.

Filip Chytil led the scoring for the New York with a pair of goals on two shots on goal.

The Rangers leapt out to an early 1-0 lead just over a minute into the game. Kreider scored the first goal with the assists from Mika Zibanejad and Frank Vatrano.

The lead was only held for about six minutes as the lightning scored their first goal, courtesy of  Steven Stamkos.

The score stayed at one through seven minutes into the second period as Vatrano scored his only goal of the game.

Although Tampa gave up the goal, they didn’t waste any time bouncing back. They went on to tie the game back up in just 40-seconds.

New York paid no mind to the goal as from there they turned the jets on.

Chytil scored his first of two goals, breaking the tie after only 90 seconds.

From there, it was all gas and no brakes. The Rangers scored three more goals after Chytil’s first and took game one.

The last time they faced off in the Eastern Conference Finals was in 2015. The Rangers took game one and Tampa came back with a victory in game two.

Head coach of the lightning, John Cooper, spoke before about past ECF appearances.

Zibanejad spoke after the game saying that a 1-0 lead is just that, and the team needs to keep playing their game in its next matchup.

“It’s a new game on Friday. Try to take some positives from this game. Got to keep going.” #NoQuitInNY

Game two will take place back at Madison Square Garden once again on Friday. Puck drop is set for 8 p.m.