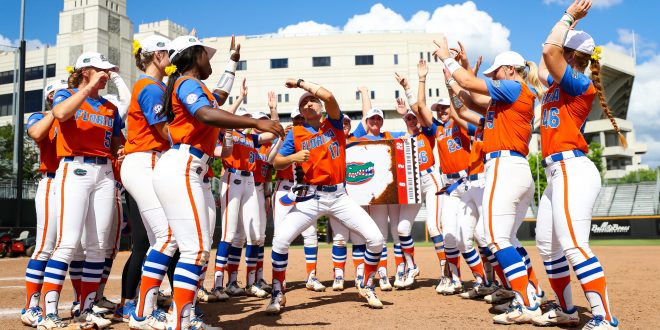 The Women’s College World Series starts on Thursday with the Florida Gators making its 11th appearance in program history. To start, the Gators play Oregon State with television coverage beginning at 7 p.m. on ESPN.

Gators back in OKC

Florida (48-17, 13-11 SEC) returns to Oklahoma City for the first time since 2019. The Gators won two of the three-game series against No. 3 seed Virginia Tech to advance past the Blacksburg Super Regional.

In their last outing, the Gators run-ruled the Hokies in five-innings after going up 12-0. Skylar Wallace hit four RBIs including a solo home run in the fifth inning. Additionally, Avery Goelz brought in three more runs to lead the way for Florida.

After struggling in SEC play this season, the Gators managed an impressive postseason run to advance to the final eight. Florida swept the Gainesville Regional 3-0 before the 2-1 series win against Virginia Tech.

Florida last appeared in the WCWS in 2019 but was eliminated in two games. The NCAA canceled the 2020 WCWS due to the COVID-19 pandemic. Additionally, the Gators failed to qualify for the 2021 WCWS after getting swept by Georgia in the Gainesville Super Regional.

Since head coach Tim Walton took over the program in 2006, the Gators have played in 10 WCWS. Furthermore, Florida won back-to-back titles in 2014 and 2015, the only two in program history.

Oregon State (39-20, 9-15 PAC-12) returns to the WCWS for the second time in school history and the first time since 2006. The Beavers advanced to Oklahoma City after sweeping Stanford 2-0 in the Stanford Super Regional.

In their only other appearance in the WCWS in 2006, the Beavers lost to eventual national champion Arizona to begin play. They then lost to Arizona State and were eliminated.

Head coach Laura Berg led the Beavers to its fifth NCAA Tournament appearance in 2022. In 10 seasons at the helm, Berg’s tenure with the Beavers has been fairly successful despite never finishing a season with a conference record above .500.

The double-elimination tournament is broken up into two brackets made up of four teams each.

No. 1-seed Oklahoma, No. 5-seed UCLA, No, 9-seed Northwestern and Texas make up the first bracket. UCLA and Texas play to begin the tournament on Thursday. Northwestern faces Oklahoma after the conclusion of UCLA-Texas.

The full bracket and schedule from Oklahoma City can be found here.