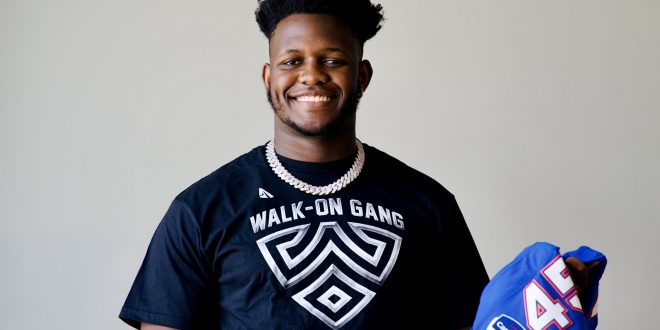 Former Florida football walk-on Clifford Taylor had an unexpected introduction to football. As a lifelong basketball player, Taylor attempted to walk on to the Florida basketball team upon his arrival in Gainesville. When that didn’t work out, Taylor settled for intramural sports.

Taylor spent his first two years at Florida attending classes and playing intramural basketball. His first taste of football came when Taylor’s friends encouraged him to join their intramural flag football team. Lacking cleats and gloves, Taylor used flag football to simply stay active and get some cardio in.

this kid has no idea… pic.twitter.com/Dz7LElI800

Everything changed one evening in the fall of 2018. With the competitive juices flowing, Taylor dropped 4-5 touchdowns in a massive beat-down of the opponent. Former walk-on defensive back Robert Clay noticed Taylor’s natural athletic ability at the intramural game and suggested he try out for a walk-on spot on the Florida football team.

Despite Clay’s enticing pitch about walking on to the Florida football team, Taylor still was unsure about the idea. The following weekend the Gators faced off against LSU in the swamp in what would turn out to be a signature win for first-year Head Coach Dan Mullen. Surrounded by 90,000 screaming Gator fans after witnessing Florida pull out the victory on a trick play, Taylor thought, “You know what, I’ll give it a shot.”

At 200-pounds, Taylor started working toward his goal of seeing his name listed on the Florida football roster. Taylor connected with Director of Student-Athlete Development and former Florida football player Vernell Brown.

The first thing Brown asked for was something Taylor did not have: film. At that point, Taylor thought this dream of joining the Gator football program was dead, but he proceeded to send a basketball film. Brown agreed to keep him in the loop with information about walking on.

The following January, Taylor attended a walk-on informational meeting which led to a tryout in February. The tryout was held during the dead period which meant that Taylor and the other walk-on hopefuls were not allowed to use any football equipment. In other words, the tryout would simply be comprised of agility and conditioning drills. Music to Taylor’s ears.

Taylor made the team, but there was one hiccup. His entire spring class schedule conflicted with spring football practices and workouts. This meant that he wouldn’t be able to join the team until the summer, but Taylor was concerned that they would forget about the “little dude who never played football before.” However, he was wrong when the call came in June.

After two seasons of living the dream as a walk-on for the Gators, Taylor graduated in August 2021 with a bachelor’s degree in graphic design. Just before graduation, Taylor got a job as a social media and design specialist for the Los Angeles Rams in June 2021. The same determination that helped Taylor earn a walk-on position propelled him into his position with the Rams. Taylor oversaw TikTok content for the 2022 SuperBowl Champions and helped the Rams grow their number of TikTok followers from 400,000 to 1.2 million. Currently, he is four months into a new position with the NBA creating Snapchat content.

Taylor describes the “Walk-On Gang” as two things: a lifestyle and a family. Ever since he began creating TikTok content, he called his followers the “walk-on gang.” This took a complete turn when Taylor began to look into the NCAA’s Name, Image, and Likeness (NIL) Policy.

At some schools across the country, walk-ons didn’t feel like they were being significantly impacted by NIL. As a result, Taylor made his “Walk-On Gang” merch line a way for walk-ons to benefit via NIL. Two Gator walk-ons, Jack Anders and Adam Mihalek, have joined in on Taylor’s NIL efforts. Taylor helps members “tell their stories and grow their social media accounts.”

Taylor’s long-term vision for “The Walk-On Gang” is to have ambassadors with personal codes that customers can use that will give the athlete a portion of the profits.