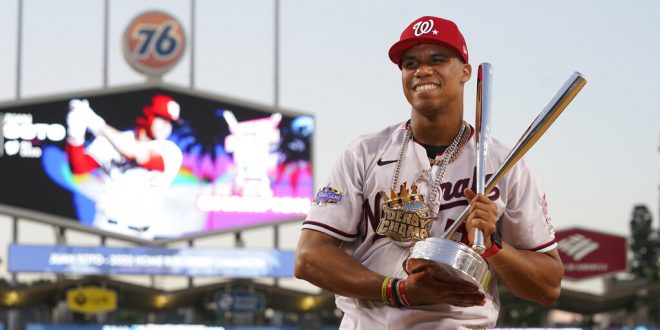 In spite of the rumors circulating about his future with the Nationals, Soto put his talent on display last night, crushing 53 home runs through three rounds last night.

At 23 years and 266 days old, he is the second-youngest player to ever win the derby and the second-ever Nationals player to take home the trophy.

Although he and Rodriguez put on a show last night, fans couldn’t help but cheer as 20-year veteran Albert Pujols defeated the number 1 seeded Kyle Schwarber in the first round.

After he finished his at-bat, players from both teams gathered at home plate to embrace one of the game’s greats.

Although this moment seemed to have stolen the show, Pujols returned to the batter’s box just a few minutes later as he defeated Schwarber in a swing-off.

As magical as this moment was, Soto put an end to the feel-good story, defeating his childhood idol 16-15 to advance to the championship round.

The Dominican Republic was well represented in last night’s Home Run Derby, with three of the final four batters hailing from the Caribbean nation.

Although he finished up just short in the final round, Julio Rodriguez put the league on notice last night, hitting 63 home runs through the first two rounds of the derby.

The rookie captured the attention of all of Major League Baseball, as he assured fans that the youth of the game is in good hands.

Soto vividly expressed his pride for his native country last night, draping himself in the DR flag after hitting the winning-home run and declaring the win a victory for the Dominican Republic.

After a week with some much speculation, Soto enjoyed taking part in the festivities and showing off his skills, as he avenged last year’s second-round exit.

Although he did his best to deflect any questions about hit future, Soto said that it felt uncomfortable to hear all the rumors from this week, despite being told weeks ago that the Nationals would never be trading him.