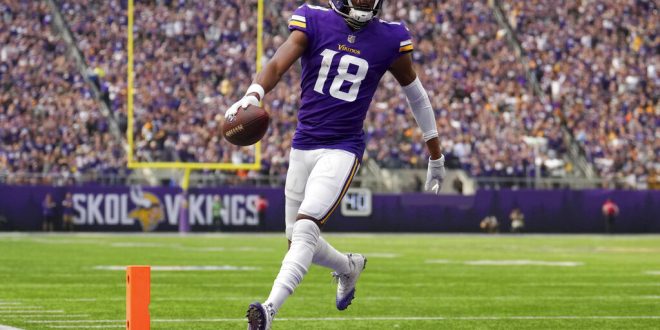 Minnesota Vikings wide receiver Justin Jefferson runs the ball in for a touchdown off a pass from quarterback Kirk Cousins in the first quarter of an NFL season opener game against the Green Bay Packers, Sunday, Sept. 11, 2022, in Minneapolis. (Anthony Souffle/Star Tribune via AP)

NFL off and running

All Around the NFL

The NFL is back. Football Sundays are back and better than ever, with teams surprising fans, coaches, and even one another by the end of every weekend, everyone around the league is getting excited. Over the past weekend, many teams dominated the playing field and set new standards around their names. With big teams coming out on top by Monday morning such as the Seahawks, Buccaneers, Cardinals, and Dolphins, the NFL has an exciting season ahead of them.

Yesterday, the Seahawks were able to clutch out a victory against the Broncos, holding a 17-16 win over Denver’s head. This leaves the Seahawks 1-0 within the official NFL Season. With the Seahawks hosting the first game of their season yesterday, the fans were ecstatic to come out with a win at the end of the night. After defeating Denver, the Quarterback for Seattle, Geno Smith, had this to say over the one point success.

Geno Smith On Win Over Bronco

The Broncos are undoubtedly a strong team, and still have a lot of Football left to play. Starting the season 0-1 Denver will definitely come back next weekend with a fire under them to not create an unwanted streak.

Tampa Bay did not come to play in Dallas on Sunday afternoon. Starting the season with a bang the Buccaneers claimed the first game 19-3 in Dallas. However, the Cowboys suffered much more than just a loss by the end of Sunday night. In the fourth quarter, quarterback for Dallas, Dak Prescott, suffered a bad thumb injury and sat out for the rest of the game. Conclusion is Prescott will be out for six-eight weeks and will need thumb surgery above his joint. A sad outcome for the Dallas Cowboys and all of their fans at the game that Sunday night.

The Kansas City Chiefs came to Arizona Sunday and left all they had on the field by the end of the fourth quarter. Defeating the Cardinals 44-21, Kansas City is excited for a 1-0 start to their season! Their week one victory took a lot of mixing and matching, the whole team, and every player contributing. This kind of teamwork is what will keep the Chiefs alive throughout a large chunk of their season. With a similar mindset within each player and everyone playing for the greater good of the team, it brings Kansas City together, ultimately leading to the defeat of the Cardinals. Here Chiefs head coach Andy Reid talks a little about the teamwork and energy the guys brought on Sunday.

The Dolphins put on a show for Miami and their fans on Sunday dominating the Patriots 20-7. This win for Miami was almost a relief for the entire team and Head Coach Mike McDaniel. McDaniel feels that the team has been together and working hard for sometime now and believe their defense is something that will be a problem for other teams and that the work they’ve put in will be a problem for others as well. The Gatorade shower of McDaniel afterwards truly showed the love the team has for one another and for the coach. They recognize that this win against New England and the way they have stet the stage for their season was a long time coming. While they won their first game season, the Dolphins mindset is only looking forward rather than celebration.

McDaniel: “What’s the Next Step?”

Head Coach McDaniel knows his job and wants to lead his team to what they deserve this season. He takes this first win over the Patriots with a grain of salt and will be preparing for the next week no matter the outcome Sunday brings.

Overall Thoughts Around the NFL

While at the beginning of every football season, every fan has their hopes and predictions, only time will tell how the 2022 season will play out. While this past weekend was filled with big wins and a big season start for many teams, grit motivation, and hard work will push teams on top over one another.

A 2022-2023 sophomore at the University of Florida, Madison is studying Journalism, Sports and Media, with hopes to one day become a reporter and journalist. Madison graduated from IMG Academy in 2021, where she competed as a student-athlete running Track and Field. Madison loves all things sports and all things Gators!
@@madiwalkerr
Previous Champions League Group G Preview
Next Around the SEC After Week Two 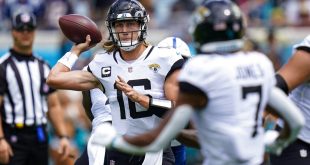