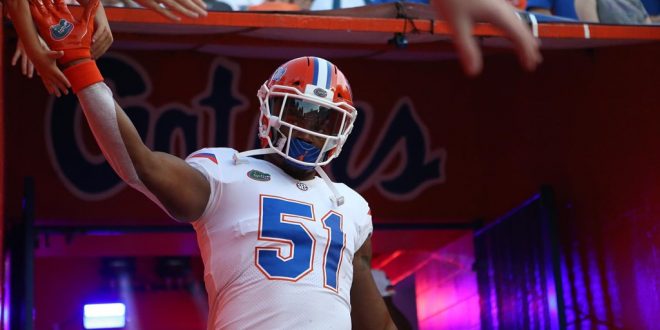 Star Florida Gators linebacker Ventrell Miller has played a pivotal role in the progression of the Gators football defense.

This comes as no surprise as he has been committed to the team since June 2016.

On Recovering from Injury

The sixth-year LB recently suffered a foot injury in the week 2, 26-16 loss against Kentucky which also impacted his absence in the following 31-28 win against USF.

Miller said he thought his injury would be worse considering his last injury, where he endured a torn bicep and was forced to sit out for the remainder of the 2021 season. Fortunately this time around, he said the Gators football training staff assured him that he was on the road to a speedy recovery.

Despite his early foot injury, he still managed to rank highest in overall-graded SEC LBs in week 2 of college football.

Miller returned in the competition against the Tennessee Volunteers and paced the Gators with six tackles followed by eight tackles in the win against Eastern Washington.

On Journey with Gators Football

Miller has notably been one of the most impactful starters in Florida’s defense having led the team in tackles back in the 2020 season with 88 tackles. He also earned defensive player of the week following the 2020 season opener against Ole Miss.

Miller has played under the leadership of three different head coaches. He said that maintaining a good character played a big role in adapting to the changes that the Gators Football team has endured in the last six years.

On Personal Growth and Mindset

Even with the many years of experience that the Veteran middle linebacker has had, Miller said he recognizes that there is always room for improvement.

He said he wants narrow down on small key details that could have a big impact on his game as his mindset is to get better day by day.