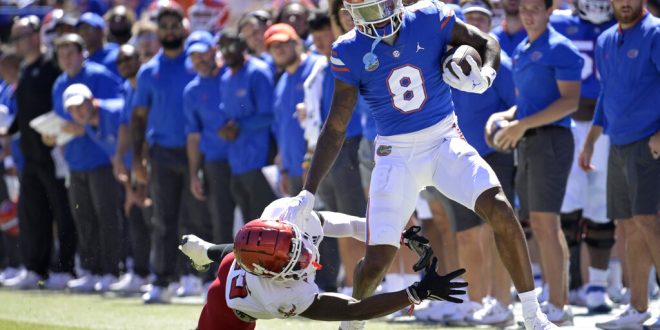 With five weeks of SEC football play down, teams still have another 8 weeks to establish themselves in the 2022 season.  Week 6 brings some exciting matchups.

The Aggies travel to Tuscaloosa on Saturday to face the No. 1 team in the nation.  Texas A&M is moving into this week after a 42-24 loss against Mississippi State.  On the other hand, the Crimson Tide remains undefeated after a win 49-26 victry against Arkansas last week.  This week, they’re heading home to face the Aggies in primetime with everything but a clean bill of health for their Heisman-Trophy-winning quarterback, Bryce Young.  Nick Saban announced that Young’s shoulder injury is “day-to-day,” and there likely won’t be another announcement before the upcoming game.

The Matchup takes place at 8 p.m.

Auburn has a tough matchup against the second-ranked team in the nation: the Georgia Bulldogs.  Last week, Auburn was defeated in a Tiger vs. Tiger bout proving their continued struggle in the ‘middle eight’- the four minutes on either side of halftime.  Auburn has been outscored 42-7 in the middle eight.

The Bulldogs, like Alabama, are undefeated this season.  Last week, the Bulldogs beat Missouri 26-22 making them 5-0 overall, and 2-0 in conference play.

The Tigers and the Bulldogs meet in Athens at 3:30.

This week, the Vols travel to Baton Rouge to face the LSU Tigers. The Tigers started their season with a loss against Florida State, but have gone on to win each game since then.  The Tigers added another win to their arsenal last weekend against Auburn at Jordan-Hare Stadium.

The Vols and the Tigers face off at noon.

Mizzou travels to the swamp this weekend to face the Gators.  Last year, Mizzou took the win over Florida by one point, 24-23, at home.  The Tigers fell to LSU last weekend. Despite their 2-3 record, Mizzou has played both Georgia and Auburn close.

The Gators blew out Eastern Washington 52-17 last weekend making them 3-2.  The Gators host the Tigers for their homecoming weekend at noon.

Kentucky returns home this weekend to face Shane Beamer, Spencer Rattler, and the South Carolina Gamecocks.  The Wildcats fell to No. 13 after a brutal loss to Ole Miss last weekend, ending an eight-game winning streak that spanned two seasons.

The Gamecocks are 3-2 and are coming into week six after a 50-10 demolition win against South Carolina State.  Their two losses this season are against Georgia and Arkansas.

The Gamecocks vs Wildcats matchup kicks off at 7:30.

A pair of SEC west rivals meet at David Wade Stadium on Saturday.  Newly-ranked Mississippi State looks to advance to 5-1 against the newly-unranked Arizona Razorbacks.

Scoring at least 39 points in all games except for its loss against LSU, and outscoring opponents 52-7 in the first quarter, the Bulldogs’ second-ranked offense in the red zone is led by Will Rogers.  They defeated the No. 17 Texas A&M Aggies 42-24 bringing them to No. 23 after week 5- they haven’t been ranked since 2020.

The Razorbacks had a 49-26 beatdown against No. 1 Alabama in front of a large home crowd last week.  Back-to-back losses knocked them out of the top 25.

The game begins at noon.

Vanderbilt has had a week off to recover from a brutal 55-3 loss against Alabama.

The Rebels look to keep their perfect season alive this weekend after sneaking past Kentucky 22-19 last week.

Jolie Katzen is a fourth-year Journalism major with a focus on sports media at the University of Florida.
Previous Florida soccer falls to No. 9 Arkansas 1-0
Next Ventrell Miller Talks Recovering from Injury and Performance

Each year, the Brandon Burlsworth Foundation gives a trophy to the most outstanding walk-on in …