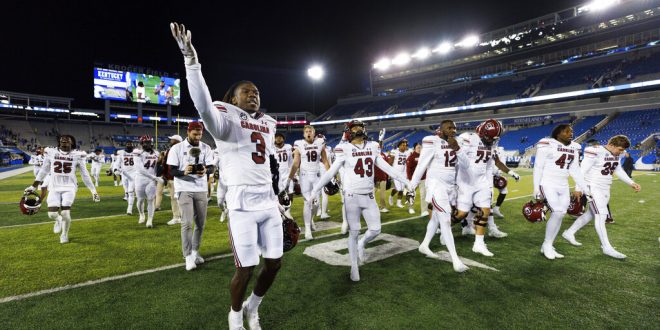 After securing a 24-14 win over Kentucky Saturday, the South Carolina Gamecocks are heading into a much-needed bye week.

Prep work to be done for Gamecocks

Coach Shane Beamer is planning to use this week to his advantage. Although the Gamecocks had a big win, he says there is still a lot of work ahead. Beamer has decided to give his team some much needed rest to regroup and get healthy so they are ready for their next game against Texas A&M Oct. 22.

As for their practices, the Gamecocks have done a lot of situational work. That includes some scrimmage games, “overtime” practice and a brief introduction to Texas A&M. Beamer really wants this team to play to the best of their ability this weekend. In order for that to happen, he believes there needs to be a break period in practices so the team can be at their healthiest.

The work for the coaches does not stop even during the team’s break. When not helping with the practices, the coaches are going to scout new potential players. Beamer said this is the best week to do so because of their win. The coaches will be traveling all over to scout and will return either on the night before or the morning of their next practice.

For the rest of the season, Beamer is going to focus on what is most important to the team. He takes pride in who his team is and the people they are. It is no question that the Gamecocks are underdogs, but the team hopes it won’t be that way for much longer. Although they are going to continue to work to be better, Beamer wants to keep the motivation there. Proud of where they are now, but far from where they will end up at the end of the season.

A program built on love. pic.twitter.com/pMiE3T1GFj

Meg Matthews is a Junior at the University of Florida, studying Sports Journalism.
Previous Louisiana at Marshall on national television Wednesday night
Next Missouri football heads into bye week