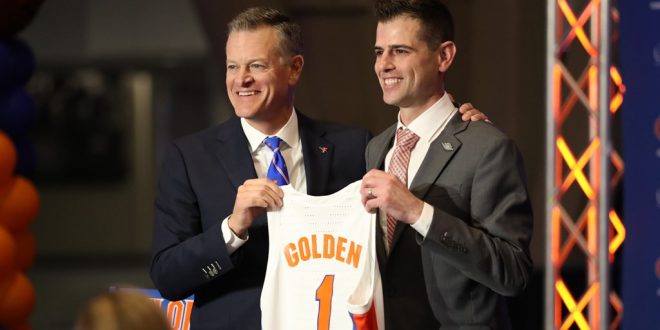 The Gators men’s basketball team will show Gator nation its newly developed team on Tuesday in the O’Dome. The Orange and Blue scrimmage will give fans a first glance at the new coaching staff and roster.

This team consists of an entirely new coaching staff and seven new players. Head coach Todd Golden leads the basketball program towards a new “Golden” era. The Gators’ last NCAA appearance was for the 2020-2021 season under head coach Mike White.

Golden led the University of San Francisco to 24 wins and its first NCAA Tournament bid since 1998 in the 2021–2022 season. He said he is confident this 2022-2023 squad has the makings to be part of the NCAA tournament this year.

The new assistant coaches include Carlin Hartman, Korey McCray and Kevin Hovde. Hartman worked with Golden at Columbia University for two seasons. Hovde worked with Golden for two years at the University of San Francisco in the assistant coach position. While McCray never directly worked under or with Golden, the Gators said they were impressed with his 12 years of experience in the SEC, which contributed to his hire.

There are three freshmen on the team. Denzel Aberdeen, Riley Kugel and Aleks Szymczyk. Aberdeen and Kugel have been teammates since they were children and were also teammates in high school. They both played at Dr. Phillips, where they led their school to its first state championship. Golden recruited German native Szymczyk through his international contacts.

The transfer portal was a significant factor when creating this year’s roster. Only eight players from last year’s team returned. Through the transfer portal, the Gators were able to acquire four desired players in Trey Bonham from Virginia Military Institute, Alex Fudge from LSU, Will Richard from Belmont and Kyle Lofton from St. Bonaventure.

The scrimmage will take place at the Stephen C. O’Connell Center, free for all fans. The first 500 UF students will receive free popcorn, and the first 1,000 fans in attendance will receive team photo cards. Tip-off is set for 7 p.m.

The Gators will officially start their season on Nov. 7 at 8 p.m. against Stoney Brook at home.

Cristina Santiago is a senior at the University of Florida studying journalism with a concentration in sports and media.
@https://twitter.com/CristinaEspinet
Previous Auburn Fires Head Coach Bryan Harsin After 21 Games
Next Around the NFL Week 8: Best Teams, Biggest Disappointments & Top Players