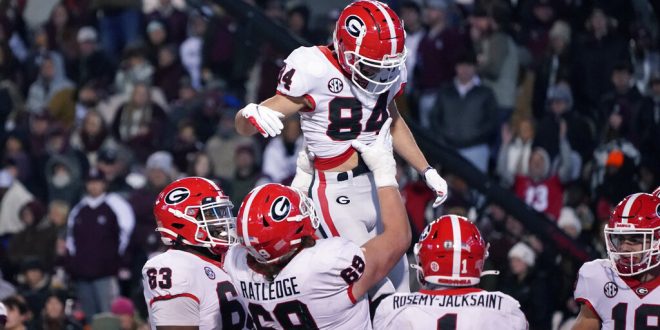 Georgia wide receiver Ladd McConkey (84) gets a lift from offensive lineman Tate Ratledge (69) after scoring a touchdown during the second half of an NCAA college football game against Mississippi State in Starkville, Miss., Saturday, Nov. 12, 2022. (AP Photo/Rogelio V. Solis)

Week 11 of the college football season was another exciting episode led by four nationally ranked teams picking up wins. Plus, there was also a major upset with one team ending a streak of 26-straight SEC losses.

The Georgia Bulldogs remain the top team in the country and are coming off a 45-19 win over Mississippi State. Georgia is now 10-0 and in a great position to play for the SEC Championship.

Following a loss to Georgia last week, Tennessee scored 64 points in its win over Missouri. This is the third time it has posted at least 60 points in a game. LSU and Alabama also picked up wins and remained in the top ten in the rankings. The Tigers are ranked No. 7 and control their destiny for a spot in the SEC Championship Game. The Crimson Tide are No. 9 and have two SEC losses.

The biggest upset this season came from Vanderbilt, who picked up its first conference win in its last 26 games. It beat Kentucky 24-21 also to pick up its fourth win of the season. Ray Davis recorded his fourth 100-plus rushing-yard-game of the season. He had 129 yards and a touchdown.

The Florida Gators continue their strong play with a 38-6 win over South Carolina. Florida also became bowl-eligible after picking up its sixth win of the season. It had a pair of players selected to the All-Conference Team. Trevor Etienne was named the SEC Freshman of the week, while O’Cyrus Torrence was selected as co-offensive linemen. Auburn also picked up a big SEC win over Texas A&M.

Despite the end of the season approaching, there will only be four games consisting of two SEC teams. Georgia and Kentucky are set to face off, while Florida is headed to Vanderbilt, and Tennessee will be playing South Carolina. The final game next week will be Ole Miss against Arkansas.