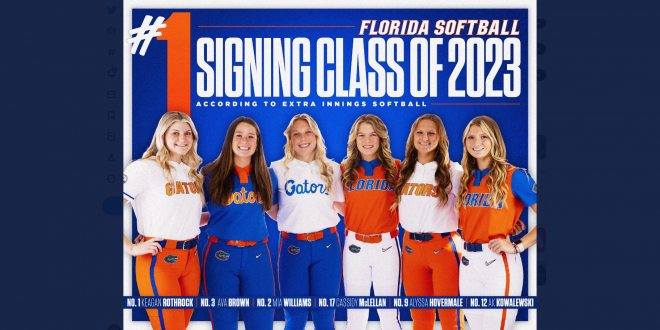 Florida’s 2023 National Signing Day crop outperformed Oklahoma, the two-time national champion.
The 2023 class includes students from all over the nation, including representation from Florida, Texas, Indiana and California.

The new signees were asked about one of the significant factors behind their commitment to the University of Florida, and they all emphasized the one-of-a-kind coaching staff. The coaching staff has built a consistent program that has included multiple national and conference championship wins. Head coach Tim Walton has guided the Gators to 16 regional appearances, 14 super regionals, and 11 WCWS. His championship-winning 2015 team received numerous honors, including five All-Americans, the WCWS Most Outstanding Player, and the National Coaching Staff of the Year from the National Fastpitch Coaches Association. Also, as of right now, the Gators softball program is ranked No. 2 in the nation. The new signees state they are excited to be part of a winning program.

A Florida Gators’ legacy is also represented in this year’s class. Williams, a second-generation Gator whose parents, Jason and Denika, both attended UF and played sports for the Gators. Gator great Jason Williams transferred from Marshall University to play under Gator legend Billy Donovan. Williams was the starting point guard in the 1997–98 season. During his time at the University of Florida, he averaged 17.1 points, 2.8 steals and 6.7 assists per game. Denika Williams was on the track team and was a two-time All-American in javelin. Williams seeks to carve her own path and is excited to be part of the Gator family, as she is happy to be continuing the Gator legacy.

Cristina Santiago is a senior at the University of Florida studying journalism with a concentration in sports and media.
@https://twitter.com/CristinaEspinet
Previous FEATURE: Amateur to Accomplished: How Annabell Fuller is making a successful Golf career as an International Player
Next SEC Football Week 11 Recap: Top Teams, Major Upset & More