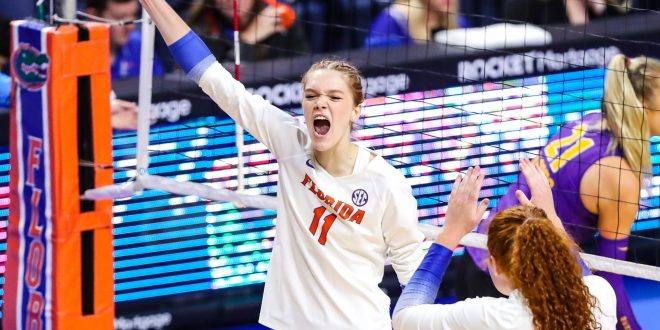 The Gator volleyball team celebrates after a point in their game against LSU on Oct. 9. Photo courtesy of @GatorsVB on Twitter.

The Florida Volleyball team takes on the No. 18 Kentucky Wildcats in the final home series of the season. First serve is at 4 p.m. on Saturday and 2 p.m. on Sunday. Florida’s two seniors, Marina Markova and Rhett Robinson, will be honored before Sunday’s match.

Markova is a senior outside hitter from St. Peterburg, Russia. She transferred from Syracuse this season and has left her mark on Florida’s program. Markova posted a season high 17 kills versus Arkansas on Oct. 30.

Robinson is a graduate outside hitter from Krum, Texas. She posted a career high 32 kills against Illinois State when she played for North Texas in 2021.

Florida Gators on a Roll

The No. 10 Gators are 20-4 on the season. Florida is holding onto a five-game winning streak heading into the weekend’s matchups.

The Wildcats have only dropped one match in the last 13 games and are riding a six-game winning streak. In Kentucky’s last match against the Tennessee, the Wildcats pulled out a 3-1 win over the Volunteers.

The Gators face off against Kentucky Saturday at 4 p.m. EST.