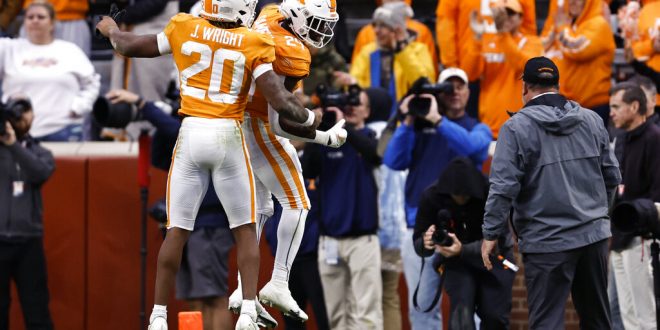 Tennessee running back Dylan Sampson (24) celebrates a touchdown with running back Jaylen Wright (20) during the second half of an NCAA college football game against Missouri Saturday, Nov. 12, 2022, in Knoxville, Tenn. Tennessee won 66-24. (AP Photo/Wade Payne)

Shane Beamer and Josh Heupel, head coaches of South Carolina and Tennessee, respectively, had a lot to say about their matchup this weekend. South Carolina (6-4) hosts the Tennessee Volunteers (9-1) at 7 p.m. Saturday. Tennessee is ranked second in the SEC East while the Gamecocks are fifth.

Beamer said he and the team are excited about this weekend and looking forward to it. Last year, the Volunteers beat South Carolina 45-20. Beamer said that last year they struggled to deal with the Vol’s momentum and getting their offense off the field.

Beamer said the team has learned from last year and has prepared and practiced to contain the Vols to the best of their ability.

Beamer called the Tenneessee defense “disruptive.” He talked about the veteran presence that the defense has with mainly juniors and seniors starting that play with great confidence and hustle. Everyone has praised the Vols offense, but Beamer emphasized their strength on defense is nothing to ignore.

Heupel started by praising the Gamecocks and their play at home. He talked about Spencer Rattler’s ability to get hot and perform at an elite level and the physicality of their defense.

Heupel said the Gamecocks have come a long way as a program since the Vols beat them last year. He said they’ve progressed in all three stages of the game and have shown the ability to make huge plays.

Heupel did touch on protecting Hendon Hooker, star quarterback for the Vols. Hooker has been sacked as many times in the last three games as he was in the first seven. Heupel said the team hasn’t played its cleanest football lately and is looking to correct these shortcomings.

The Tennessee Volunteers have only one loss on the season against SEC leader Georgia. The Vols have one of the most explosive offenses in the SEC and are looking to prove to everyone they aren’t finished.