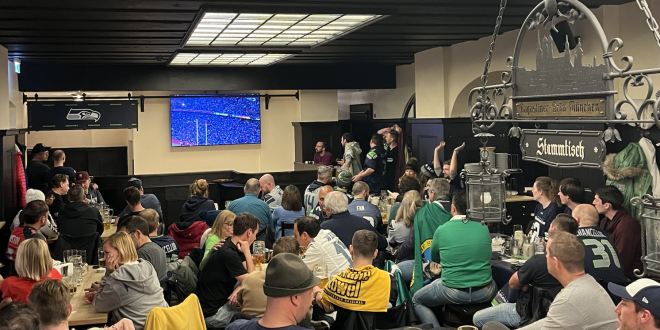 Hundreds of Seahawks fans pack into the Augustiner Stammhaus restaurant in Munich to watch the Seahawks take on the Buccaneers in the NFL's first-ever NFL game in Germany.

FEATURE: What’s Next for the NFL International Series?

Since kicking off their International Series in 2007, the NFL has already seen plenty of success outside the United States. After 33 games in England and five in Mexico, the NFL International Series continued its expansion with the first-ever regular season game in Munich, Germany on Nov. 13. The Tampa Bay Buccaneers took home a 21-16 victory over the Seattle Seahawks in an electrifying matchup at Allianz Arena, the usual home of soccer’s Bayern Munich.

Needless to say, this NFL game held far more significance than just the final box score. With the success the NFL saw in Munich, the league’s international future continues to show its promise. Every matchup beyond the borders of the U.S. generates even more excitement for a game focused on going global.

All of this leads to a key question: What exactly does the future hold for the NFL and its international endeavors? The league has been weighing its options for quite some time now.

Success Within The UK And Germany

The NFL International Series already has plenty of action set up for the foreseeable future. Multiple stadiums in London are slated to host more games in the coming years. Wembley Stadium, the original host for the NFL International Series, will continue its role through 2024. Additionally, Tottenham Hotspur, which hosted its first game this year will welcome at least one NFL game every year through 2028.

Outside of London, the NFL has also locked in more games with Germany over the next three years. Allianz Arena will host another game in either 2024 or 2025. Meanwhile, Deutsche Bank Park in Frankfurt will play host to the NFL in 2023 and either 2024 or 2025 as well.

The German fan base has already shown out in tremendous fashion at Allianz Arena for the Buccaneers-Seahawks game. Even Tom Brady called the game “one of the great football experiences” he has ever taken part in.

It appears that Brady’s love for Germany is mutual as well.

The International Series has continued this expansion thanks to increased interest from these overseas market. Daniel Farmer, a British fan of the Washington Commanders, admired how the enthusiasm for these international games has grown in the past decade.

“I remember I went to my first game at Wembley for the International Series in 2013,” Farmer said. “The excitement here is one above, I think. It’s been really, really good.”

While the NFL has already found success in Germany, England and Mexico, they may be looking to break down even more barriers. In December 2021, the league announced the International Home Marketing Areas initiative. The program centers around 18 different squads engaging in new international markets to “build their global brands” and find new fan bases.

Germany, Mexico and the UK all have multiple teams with access to their markets. Additionally, countries such as Canada, Brazil, Spain, Australia and China all have connections to at least one NFL team as well. This may serve as a possible indicator as to which markets the NFL may target for potential future International Series matchups. Recent reports indicate France and Spain currently top the list even though no team has “home marketing” rights in France.

International NFL fans across the globe are excited at the prospect of the league expanding the International Series even further. More fans will now have opportunities to see their favorite squads take the field in person without needing to travel across the world.

“They really have a reason to expand,” German Green Bay Packers fan Christopher Kind said. “The fanbase in Europe is growing a lot. It’s important to go overseas, to go to the fans and let them see games in their home country.”

With all the NFL’s international success, there have even been whispers about a team potentially moving overseas permanently. The Jacksonville Jaguars have been heavily linked to a potential relocation to London in the future. Prior to the COVID-19 pandemic in 2020, the Jaguars played a home game at Wembley Stadium every season since 2013.

Additionally, Jaguars’ owner Shahid Khan already has ties with London through his ownership of Premier League club Fulham F.C. Nevertheless, it does not appear that the Jaguars will be relocating any time soon. Khan has remained adamant his team will stay in Jacksonville for the foreseeable future.

A more likely route for permanent overseas expansion would be creating new international teams. No teams in the U.S. would have to relocate, allowing the league to maintain their current fan bases while adding new ones across the world.

However, this plan may also face some potential snags down the road. Most NFL owners want to maintain the league’s current 32-team structure. They believe adding more teams in either domestic or international markets would add unnecessary complications to the current system.

While the NFL still has plenty left to figure out regarding their international future, one thing seems clear: the future remains bright for American football. And not just in America anymore.

Jack Meyer is a second-year student at the University of Florida. He is majoring in Journalism and specializing in Sports and Media.
@jackmeyerespn
Previous Napier Talks Vandy, Looks Ahead to FSU
Next FEATURE: How did the NFL end up in Germany?