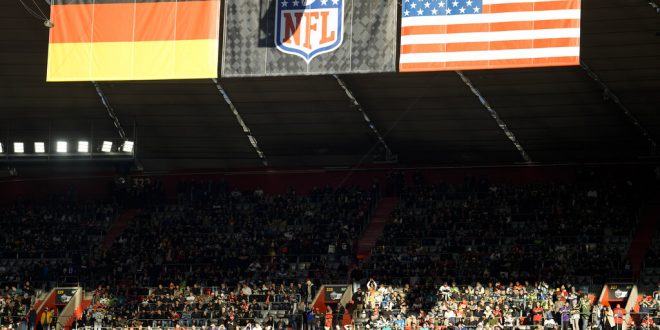 The German and the United States national flag displays nex to an NFL banner over the stands of the Allianz Arena, prior to a NFL match between Tampa Bay Buccaneers and Seattle Seahawks in Munich, Germany, Sunday, Nov. 13, 2022. (AP Photo/Markus Schreiber)

FEATURE: How did the NFL end up in Germany?

That’s right — football (and we don’t mean soccer) took over Munich. The Bavarian city hosted the first ever regular-season NFL game in Germany this past weekend. The Seahawks faced the Buccaneers in the historic game that came as a part of the 2022 International Series. It is the fourth of five games being played abroad this season.

Starting this year, the NFL announced each team will play internationally at least once every eight years.

The NFL has been trying to ramp up its international image for decades now with varying levels of success. Germany has been one of the most receptive European countries because of their rich history with the sport.

Despite a predominantly soccer-focused society, Germany has had a long relationship with American football.

American soldiers helped spread the influence of American football by playing while deployed abroad, especially in France, Germany and England.

In both World Wars, football players flocked to enlist in the armed services. In 1916, the entire Harvard football team served in the military, and the same was true of many big Eastern colleges.

Military influence also diffused in the other direction, giving coach Clark Shaughnessy, known as the father of the T formation and forward pass, inspiration from German military tactics. After WWII, he admitted he based player and formation movements on blitzkrieg tactics the Germans used in the Battle of France fought in May and June 1940.

Fast forward 40 years to a more peaceful time among Western nations, the NFL realized the potential of the untapped market abroad, especially Europe. So, the league organized an exhibition game between the Minnesota Vikings and St. Louis Cardinals in 1983 in London. The success of that game, which more than 30,000 people attended, led to the creation of the American Bowl Exhibition Series.

That series consisted of NFL pre-season games played abroad between 1986 and 2005. The first three games were played in London and later expanded to Japan, Germany, Canada, Spain, Mexico, Ireland and Australia. Five of the 40 American Bowl games were held in Berlin, Germany.

The World League of American Football started soon after in 1991. Paused in 1992 and rebranded to NFL Europe in 1995, the project failed, losing an estimated $30 million per season, causing the WLAF to close operations in 2007 after 15 seasons.

In 2015, Andrew Brandt, the general manager for the Barcelona Dragons, recounted the European crowd at WLAF games for author Jorge E. Moraga:

“American football, for the fans that came, was a curiosity far different than their passion for soccer,” Brandt said. “They cheered at all the wrong times [and] just wanted to have some fun. So we made it a party. We changed our entire marketing approach, from selling American football to selling an American event. We sold hot dogs and hamburgers [and] blasted American rap music at every stoppage of play.”

The most recent push to globalize American football came after NFL Commissioner Roger Goodell announced his goal to reach $25 billion in annual revenue by 2027. The league can accomplish this goal only if they export their American football brand abroad.

The NFL’s first signs of promise abroad showed in the London market. Because of the common language and culture, shortened travel time and the advanced state of the sport in the United Kingdom (comparatively to other foreign nations), London has held 31 regular-season NFL games — the most of any country other than the United States.

Aside from London, Germany also shows strong promise. Lars Dzikus, who grew up and played football in Germany himself, the NFL’s announcement of a game in his home country seemed natural.

“This step was the logical extension of previous developments,” said Dzikus, now a professor of sport studies at the University of Tennessee. “The NFL realized they have to offer ‘the real deal’ with regular season games to garner more media and fan interest in Europe. After England, Germany was the next logical target [having] the strongest grassroots foundation [for football].”

In Munich, the NFL strived to keep attendees interested by providing more fan involvement than seen at domestic games. The fan fest outside of the Allianz Arena featured a 40-yard dash, field goal kick, quarterback challenge and wide receiver challenge where fans could test their skills.

Fan interest and knowledge of the sport has been steadily increasing across Europe, especially in the United Kingdom and Germany. In contrast with Moraga’s description of previous games abroad, the fans in Munich seemed to know football better now.

Bradley Shimel was one of two UF College of Journalism and Communications students to attend the Munich game.

“The fans did cheer at the right times for the most part,” Shimel said. “There were a few instances where in America, last possession of the game for the team losing, the [winning] team [would be] on its feet … but that wasn’t really the case here.”

“For the most part, normal gameplay [caused] normal [reactions] but in certain situations it wasn’t the same.”

The unique fan experience provided made up for the long trip from Florida.

“The atmosphere was truly unbelievable,” Shimel said. “You could just feel the energy in the stadium; it was so much bigger than the Bucs vs. the Seahawks. Everyone was just so happy to be a part of that event … it’s definitely something I will never forget.”

Fans traveled far and wide to see the historic game. Bucs superfan Keith Kunzig, also known as “Big Nasty,” was one of them. For the past 35 years, Kunzig has dressed up in his signature attire to support the Tampa team, with this season being his last run.

“Being a two-time hall of fame Buccaneers fan in the Pro Football Hall of Fame, you gotta come and you’ve gotta represent, whether it’s across the pond or at home,” Kunzig said.

Plenty of Germans attended the game as well, such as eight Munich residents in the drumline. One American expat in the group convinced them to support the Bucs by all wearing Brady jerseys on game day.

The future of football

While this was the first NFL game in Germany, it definitely will not be the last. Over the next four years, Germany will host one NFL game a season alternating between Munich’s Allianz Arena and Frankfurt’s Deutsche Bank Park.

However, the NFL still has hurdles to jump.

“Whether the NFL will stick to the plans will depend on the team owners and the NFLPA,” Dzikus said. “They have to judge whether they get the desired return on investment. As we have seen with the World League/NFL Europa, the NFL does not shy away from changing course. There are several threats to the project, including COVID, wars, terrorism, labor unrest with the NFLPA, disgruntled season-ticket holders in the US, and, at times, volatile owners.”

It’s also important for teams to build a strong personal connection with their fan base, especially fans abroad that are less connected to the sport.

“The novelty of having NFL games ‘at home’ might also wear off if European fans cannot identify with teams that come to town only once a year and do not represent their cities,” Dzikus said.

The NFL’s strategies for the Munich game paid off as Tom Brady and Buccaneers fans agreed it was worth the wait.

Fans will have to wait until next year for another European NFL game to return. Next week, the NFL’s international series is wrapping up in Mexico City where the San Francisco 49ers will face the Arizona Cardinals.

The @49ers and @AZCardinals will meet in Mexico on Nov. 21 on ESPN! @nflmx @NFLEspanol pic.twitter.com/WQw00HBJbW

@714caroline
Previous FEATURE: What’s Next for the NFL International Series?
Next FEATURE: The Atmosphere of a Lifetime in Munich