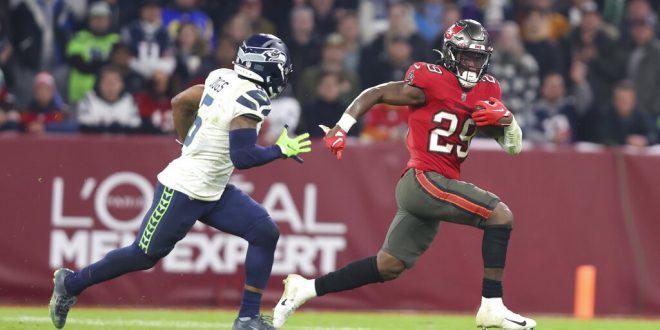 The Tampa Bay Buccaneers held on to an early lead to beat the Seattle Seahawks 21-16 in the first NFL game played in Germany.

The Bucs got off to a strong offensive start in the first half. Veteran receiver Julio Jones caught an underneath pass from Tom Brady and ran for 31 yards to get the Bucs on the scoreboard first.

Running back Leonard Fournette got in on the action as he punched in a one-yard touchdown run, extending the Tampa lead to 14-0 with 4:30 remaining in the first half. The Bucs would take their 14-0 lead into halftime.

In the third quarter, the Bucs offense couldn’t find the endzone and the only scoring in the quarter was a Seahawks field goal.

The fourth quarter provided much more excitement. Brady connected with wide receiver Chris Godwin for his second touchdown pass of the day, giving the Bucs a 21-3 lead. However, the Seahawks responded with back-to-back scores, trailing 21-16.

But the Bucs stayed composed and iced the game with a first down run from rookie running back Rachaad White. with 1:50 remaining in the game. White finished with 105 yards on the ground on 22 carries.

In the first NFL game played in Germany, the matchup took place at Allianz Arena. This is the home stadium of major German soccer club Bayern Munich. A sold out crowd of 69,811 provided a surreal atmosphere.

Additionally, the players commented on the exciting environment with both Brady and Jones making an effort in the postgame press conference to commend and thank the fans.

The Bucs now sit at 5-5 and sit atop the NFC South. They head into a bye week before gearing up for a playoff push in the back half of the year. The Seahawks are now 6-4, but they still lead the NFC West. Seattle also heads into their bye week before facing the Las Vegas Raiders in week 12.