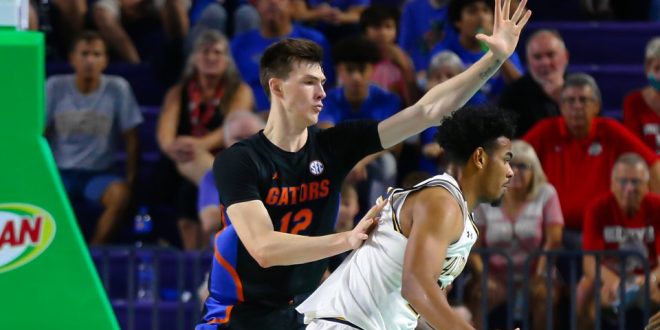 After suffering a first round loss to Xavier, the Florida Gator men’s basketball team (4-2) bounced back and defeated the Oregon State Beavers (3-3) 81-68 in the second round of the Phil Knight Legacy Tournament. The Gators saw another explosive offense performance from Trey Bonham who finished with a game high 19 points. Florida led by as much as 23 points in the first half of the game.

Explosive offense for the Gators

For Florida, the mentality was different from the get go. They looked more energized than they did at any point in the first round. Florida jumped to an early 9-0 lead to start the game and forced Oregon State to call a timeout. It was evident the Gator offense was going to be dominant all night.

Star big man Colin Castleton got to work early and helped contribute to the Gator double digit lead heading into halftime. In total, the Gators had four players finish in double figures, while shooting 56% from the field as a team.

The Gator perimeter defense was key in holding the Beavers to under 30 points heading into halftime. Oregon State went on numerous scoreless runs due to the discipline Florida was showing on the defensive end. Their guards were locking up on the perimeter and Castleton was anchoring in the paint, finishing the game with three blocks.

The Gators held the Beavers to only 38% shooting from beyond the arc. This helped them build upon their leads and disrupt any type of offensive momentum that the Beavers gained. With veteran play at almost every position, this Florida team is hopeful of impactful defensive performances throughout the rest of the season.

The Oregon State Beavers will play Portland State on Sunday to compete for seventh place in the tournament.

The Gators are still in the losers bracket, but will be fighting for fifth place against West Virginia on Sunday.

Previous No.16 ‘Noles Defeat Gators 45-38 in Football Rivalry’s Highest Scoring Game
Next Ben Simmons Is Back