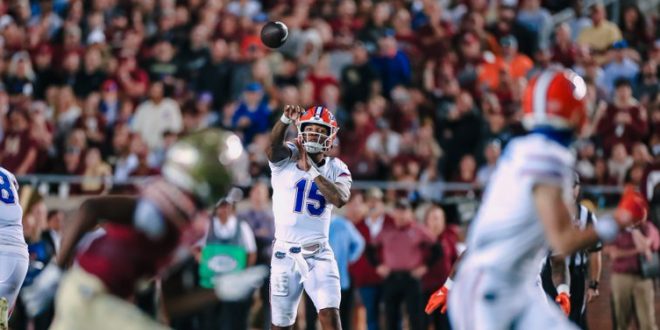 The in-state football rivalry matchup between the Florida Gators and  number 16 Florida State Seminoles saw a back-and-forth contest from the very start. However, despite holding a 24-21 lead at the half, the Gators fell to the Seminoles with a final score of 45-38 in what was the highest-scoring game in the history of this Sunshine State rivalry. A combined 83 points from Friday night’s showdown surpassed the 72 points scored between these two teams on January. 2, 1997 in the National Championship game.

However, Florida State running back Trey Benson put the Seminoles ahead, finding the end zone on a 17-yard run on what would be the final score of the night. The Florida State Seminoles had done it; they had beaten Florida for the first time since 2018, snapping a three-game losing streak to the Gators.

Doak Campbell Stadium roared with fans dressed in Garnett and Gold chanting for their Florida State Seminoles who also swept the entire state for the first time since 2016. Fans stormed the field in celebration of Florida State reclaiming its state crown.

Back and Forth Battle

The Florida defense built momentum early as Gator linebacker Shemar James opened the game by forcing a fumble that was recovered by Gator safety Tre’Vez Johnson. However, the Seminoles made their way on the board first as Benson ran it in for a nine yard touchdown.

The Gators answered right back. After a 48-yard kickoff return by Etienne, Florida quarterback Anthony Richardson delivered a 52-yard strike to Florida wideout Ricky Pearsall for a tied 7-7 game early in the first.

Richardson had the following to say about the touchdown play.

After driving to Florida’s 34, FSU failed to convert on 4th and 12 and the Gators took over at the 36. Then, Richardson connected with Florida tight end Jonathan Odom for a 12-yard Gators touchdown. Florida took the lead 14-7. Then, Seminoles quarterback Jordan Travis ran it in from 29 yards as the back-and-forth contest continued.

The Florida defense held in the red zone and the Seminoles missed a 37-yard field goal attempt. Florida got the ball and on third and five, Richardson completed a critical 32-yard pass to Pearsall. Richardson then followed with a 43-yard dart to Pearsall.

The touchdown marked the second for Pearsall, who had recorded a career-high 139 yards on four receptions by halftime. The Arizona transfer was listed as “questionable” on UF’s depth chart entering the contest. With a depleted Gator receiving room, Pearsall was key to Florida’s early success.

Gators Lead at Half

The Seminoles continued the back-and-forth contest when Travis pulled off an impressive escape. After being ruled down at the one, he ran it in on the next play, tying the game at 21. The Gators next scored on a 41-yard field goal by Florida kicker Adam Mihalek with 42 seconds remaining. Florida forced a three-and-out, holding a 24-21 lead over the Seminoles at the end of the first half. Florida managed to gain an early lead with a balanced offensive attack throughout the first half.

However, Florida’s lead did not last long. During the second half, the Gators failed to capitalize on the success of the first half. The Seminoles scored 17 unanswered points in the third quarter, first tying the game at 24 on a 46-yard field goal off the cleat of Florida State kicker Ryan Fitzgerald. Soon after, Benson ran it in for a touchdown on third and goal and Florida State now led the Gators 31-24 with just over four minutes remaining in the quarter.

The Seminoles did not stop there. Travis connected with wide receiver Kentron Poitier for a six yard touchdown, bringing the Garnett and Gold on top 38-24 with 2:38 remaining in the third.

While the Gators looked to end the regular season on a high note, the players have a positive outlook for the future. First-year head coach Billy Napier has amassed a 6-6 record with the Gators, but Richardson says the future for Florida Gator football is bright.

Additionally, when asked about his own plans for the future, Richardson responded, “We just gotta get to the drawing board and figure out why I’m 9 of-27.”

In his first look at the stat sheet, the Gator quarterback shook his head in disappointment. When asked what that was about, he said going 9 of-27 passing.

Richardson also spoke highly of the brotherhood among the Gators, which Napier commended during his time at the podium.

Meanwhile, Florida senior linebacker Ventrell Miller did not give a definitive answer on whether he will play in Florida’s bowl game. Miller went on to thank Gator Nation in what may be his last time suiting up in the Orange and Blue.

.@ventrell_miller on playing what could be his last game as a #Gator:
“Like I say every day, it’s great to be a Florida Gator. Coming here has brought me from being a boy to a man and I just want to say thank you to everyone who has helped me along the way.” pic.twitter.com/a6q5dl8OoN

Ellie is a third-year sports and media journalism major at the University of Florida.
@ellie_shreve
Previous FEATURE: A look at Maddy Pirrello’s Gator Soccer Career
Next Gator Men’s Hoops Get Bounce Back Win