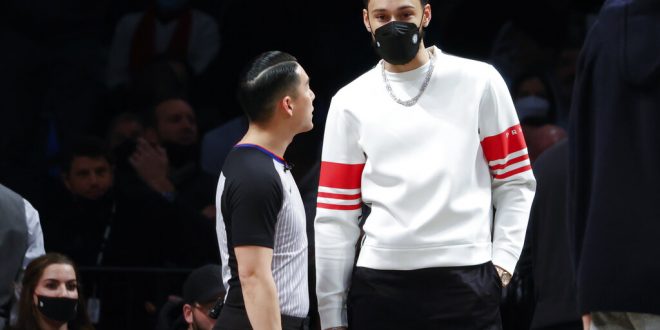 Brooklyn Nets' Ben Simmons, right, looks on during the second half of an NBA basketball game against the Sacramento Kings, Monday, Feb. 14, 2022, in New York. (AP Photo/Corey Sipkin)

Since Ben Simmons was traded to Brooklyn, he has not performed at the level he did in Philadelphia. Throughout his short-lived 2021-222 season with the Nets, Simmons had a herniated disc identified in his back that required immediate surgery. He was out for the season. Yet, Simmons believed his body was ready to return after healing from the surgery, months of rehab, and a slow start into pre-season Training Camp.

Simmons was part of a Philadelphia 76ers team that found significant playoff success, reaching the conference semifinals. After being the first overall pick of the 2016 NBA Draft, he later became the NBA Rookie of The Year. He served as the primary ball handler and defensive anchor of the 76ers. Simmons led the NBA in steals in 2020 and has been named to the All-NBA First Team twice. The accolades are prominent and abundant, but Simmons’ play has faltered.

After sitting out the beginning of the 2021 season due to personal reasons, he was traded to Brooklyn. The change of scenery didn’t benefit Simmons immediately, as he missed the remainder of the year. Although he was expected to return in the playoffs, he objected due to back soreness.

Fast forward to this young ‘22-23 season, Ben Simmons has played in twelve official season games. After scoring just forty-seven points within the first nine games, he flipped a switch. He scored a whopping forty-eight points within the past three games.

What does this mean for Brooklyn?

The team looks solid and methodically built on paper, especially with Ben Simmons back in action for the Nets. Kyrie Irving has returned from suspension, and the team is firing on all cylinders.

Simmons appears comfortable on the court with Irving and Durant; it has encouraged other vital pieces like Joe Harris, Seth Curry, and Yuta Watanabe to play freely. At this point, they have only played a total of four minutes with each other

The Nets have some tough competition ahead. They face Eastern Conference powerhouses like the Raptors and Celtics in upcoming games.

Tyler Carmona is a junior journalism major at the University of Florida. Originally from Miami, Tyler played football as a wide receiver at the University of St. Francis before transferring to UF.
@@TylerCarmona
Previous Gator Men’s Hoops Get Bounce Back Win
Next Florida Volleyball Clinches SEC Title 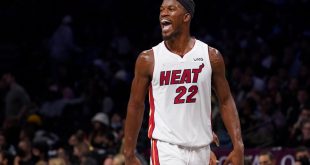 The Miami Heat took down the Brooklyn Nets 106-93 on Wednesday.  Brooklyn Burnt in the …