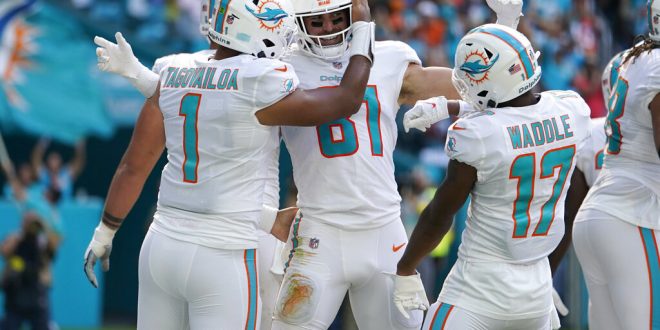 The Miami Dolphins used a dominant first half against the Houston Texans to earn their fifth straight victory 30-15 on Sunday. The Dolphins scored 30 points in the first half and cruised to a victory at home.

Miami was attacking on all parts of the field in the first half. On their first drive, they kicked a field goal to take a 3-0 lead. Later in the first quarter, Miami found themselves in the red zone again, and quarterback Tua Tagovailoa slithered out of the pocket and found Durham Smythe for the touchdown. The pass moved Tagovailoa’s passing touchdown number to 19 on the season and increased the Miami lead to 10-0.

The Dolphins didn’t take their foot off the gas in the second quarter. A Jeff Wilson touchdown run and another Jason Sanders field goal moved the lead to 20-0.

Defensively, Miami had the Texans offense frustrated. The nail in the coffin came with about five minutes remaining in the half. A conversion of Dolphins defenders resulted in a huge hit on Jordan Atkins, causing a fumble that Xavien Howard scooped up and returned for a touchdown.

In the second half, the Dolphins pulled Tagovailoa out of the game in the third quarter. Despite a late comeback effort from Houston, it was too much for the team and the Dolphins took home their fifth straight win 30-15.

They win moved Miami’s record to 8-3 on the year and they sit atop the AFC East standings. The Bills also are 8-3, but a head-to-head victory for the Dolphins earlier this year gives them the advantage. However, the Dolphins will face a tough stretch of games over the next three weeks. All three games come on the road against teams with records over. 500. Miami travels to San Francisco to face the 49ers, then visit the Los Angeles Chargers and finally cap off the road trip with a visit to Buffalo.

The Dolphins offense has been nothing short of terrific, so far this season. Despite missing significant time or not playing at all in three separate games, Tagovailoa still sits in the top half of the league in yards, touchdowns and is completing nearly 70% of his passes. Wide receiver Tyrek Hill has been outstanding, leading the league in both receptions and yards. If the Dolphins want to continue this win streak, they’ll have to continue to lean on those two stars.