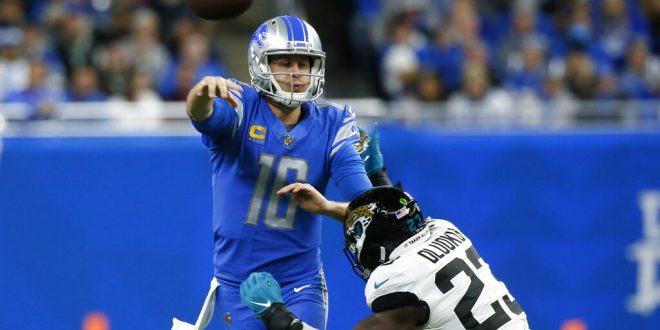 Week 13 represented the opportunity to turn the corner on a Jacksonville Jaguars season marked by notions of “not being quite there.” 4-7 on the season, with six of those losses coming in one-score games, a win over the Jared Goff and the Lions would’ve catapulted the Jags through December.

The Jaguars came into the game coming off of one of their most exciting recent victories, outlasting the Baltimore Ravens thanks to a two-minute drill led by Trevor Lawrence and a game-winning two-point conversion by Zay Jones.

The Lions had three extra days of rest before the game. They hadn’t played since Detroit’s three-game winning streak against the Buffalo Bills ended in a 28-25 setback in their annual Thanksgiving home game.

But ultimately, the Jaguars fell to 4-8 on the season after a 40-14 loss to the Detroit Lions (5-7). The loss represented the heaviest Jaguars defeat of the season in a game marked by a dominant Lions offense.

Relegated to the kick

The Jags couldn’t have gotten off to a worse start on their first drive of the game. Just when Travis Etienne Jr.‘s second carry of the game seemed to gash the Lions for a big gain, Detroit’s DeShon Elliot ripped the ball from the running back’s grip. Alex Anzalone recovered the fumble in what would mark the beginning of an offensive onslaught for the Lions.

Opening drive momentum would favor the Lions though as Jamaal Williams would find his league-leading 14th touchdown of the season on a one-yard rush in the first.

The Jaguars answered with a 10-play 62-yard drive good for a 31-yard field goal. This would be the first of two field goals that would encompass the Jags’ offense for the whole of the first half.

Jared Goff would increase the Lions’ lead to 11 after connecting five times through the air. The 75-yard drive was capped by an acrobatic Amon-Ra St. Brown reception on the pylon. The Jags’ next two drives ended in punts answered by Detroit field goals. At the half, the Lions led the Jags 23-6 behind an inspired Goff. The Detroit quarterback would lead his team downfield for a D’Andre Swift score to start the second half.

The Jaguars showed signs of life, or perhaps the shadow of the team not “quite there” on their next drive. Trevor Lawrence would bear down on the clock in a must-score 16-play drive spanning 75 yards in seven minutes and 41 seconds. Jamal Agnew finished off the eight-point drive for the Jags.

Goff and St. Brown killed off the Jags on their last drive with yet another scoring effort from the duo. The Lions would come away with the win having not punted the ball away all game.

The Jaguars will look to bounce back in Week 14 at the Tennesee Titans (7-5). The AFC South will officially be in jeopardy for the Jaguars. In Doug Pederson’s first season, is this disappointment? Only time will tell for the team has “not been quite there.”