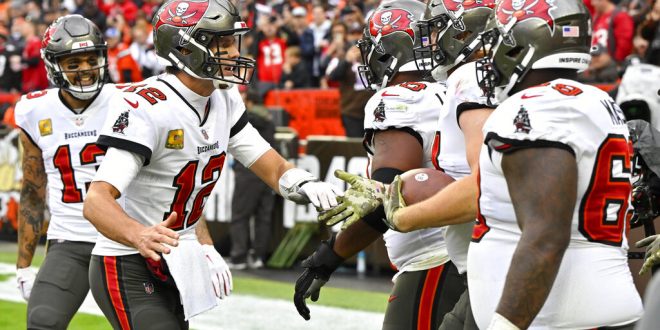 Tampa Bay Buccaneers quarterback Tom Brady (12) celebrates with Tampa Bay Buccaneers tight end Ko Kieft after the two connected for a touchdown during the second half of an NFL football game against the Cleveland Browns in Cleveland, Sunday, Nov. 27, 2022. (AP Photo/David Richard)

Week 13 of Monday Night Football continues as the New Orleans Saints face the Tampa Bay Buccaneers at the Raymond James Stadium Monday night. The two teams faced each other in week 2, and the Bucs ended up with a 20-10 against the Saints.

The Saints will look to bounce back from their zero-touchdown loss last week to the San Francisco 49ers. The Saints are currently in the last place in the NFC South with a 4-8 overall record.

The Bucs are also looking for a win after their close loss to the Cleveland Browns in overtime last week. The Bucs are in first place in the NFC South with a 5-6 overall record.

Saints Look to Split the Series

The Saints are currently one win behind their division leader. They have to fight for a win to not only catch up in the division for a playoff spot but also prevent the Bucs from defeating them twice this season.

Pass offense has proven to be a relative strength for the Saints. In week 12, quarterback Andy Dalton did not have an impressive performance with 62.1 CMP%, 204 yards, 83.1 rate and 0 TD. However, his link with running back Alvin Kamara and wide receiver Chris Olave was strong. Kamara had 6 rec and 37 yards while Olave had 9 targets, 5 rec and 62 yards.

The Saints defense has been a weakness all season long, but some improvements can be seen in the past weeks. For pass defense, they have a 108.5 rate allowed for wide receivers. Last week, they held the 49ers’ running back Christian McCaffrey to 4 recs and 17 yards. As for their rush defense, they held the 49ers to 29 att, 96 yards and 3.3 YPC. Even so, the Saints have to continue to improve their defense if they wish to stop the Bucs’ offense.

Bucs Looking for a Sweep

The Bucs are looking for a sweep tonight after their win against the Saints in week 2. They managed to hold the Saints only to 10 points in their last matchup. This would be an important game for the Bucs as they look to further establish their position in the division.

Clean Up the Offense

The Bucs have to clean up their defense if they want to get pass the Saints’ defense. Third down offense continues to be a huge weakness for the Bucs. In week 12, they were 4-15 on third down, ranking 22 overall in the league. Their red zone rate is another prominent weakness as they currently rank 25 in the league.

Quarterback Tom Brady has been having a solid season with 92.4 rate, 14 TD and 2 INT. However, his connection with wide receiver Mike Evans has to be addressed as Evans had 9 targets, but only 2 rec and 32 yards in week 12. Fortunately, Brady’s connection with wide receive Chris Godwin and running back Rachaad White continue to be their strength. Godwin averages 65 YPG this season. In week 12, he had 13 targets, 12 rec, 110 yards and a TD. On the other hand, White had 9 targets, 9 recs and 45 yards. White’s run game is also impressive as he had 14 att, 64 yards and 4.6 YPC in week 12.

The Bucs have to hold strong on defense as they face the Saints tonight. In week 12, their defense was a weakness they led to their overtime lost against the Browns.

Their rush defense averages 4.6 YPC allowed. In week 12,  they allowed 116 yards and a TD for the Browns’ running back Nick Chubb. As for their pass defense, they allow an average of 106.0 rate to running backs.