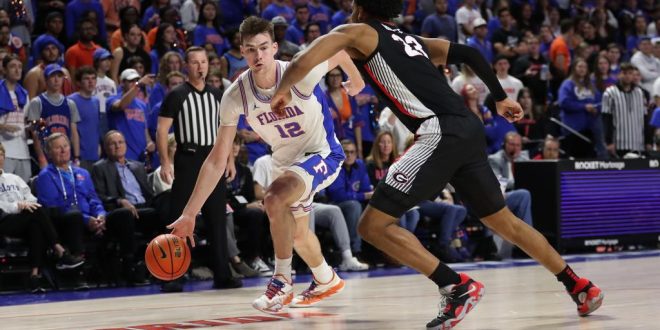 The Florida Gators men’s basketball team (10-8) fell 54-52 to the Texas A&M Aggies (13-5) in a nail-bitter. This ends Florida’s three-game winning streak and improves the Aggies conference record to 5-0. The Aggies have now beaten the Gators in both season meetings. The game started with a terrible offensive performance by Florida but ended with a potential game winner.

The Gators started the first few minutes of the game scoring no points. It wasn’t until Florida guard Myreon Jones hit a three to get them on the board. Jones came into the game vastly improving his offensive impact. His veteran presence has been much needed as they continue SEC play.

In the first 10 minutes of the game, the Gators only scored five-total points. Although Florida couldn’t score the ball, Texas A&M wasn’t doing much better. For most of the half, it was either teams’ game.

After 20 minutes, the Gators went 2-26 from the field and 1-11 from the three point line. Their shooting performance was terrible and there seemed to be no momentum heading their way.

The Gators Make A Late Push

Florida opened up the half scoring much better than they did before. They rebounded better on the defensive end, which created easier shot opportunities. Gators center Colin Castleton recorded a double-double after a dominate run in the second half. When Colin plays to his potential, Florida plays at its highest level.

In the final minutes of the game, Florida made it as close as a one-possession game. The Aggies were failing to convert their shots and grab defensive rebounds. However, they managed to pull out the victory by just two points. In a game that featured subpar play from both squads, Texas A&M remains undefeated against SEC opponents.

Up Next for Both Squads

Texas A&M heads to Kentucky on Saturday. This will be a tough matchup for the Aggies as they look to extend their SEC record to 6-0.

Florida is playing at Mississippi State on Saturday. This will be their opportunity to get back on the win column before they come home for a battle with South Carolina.