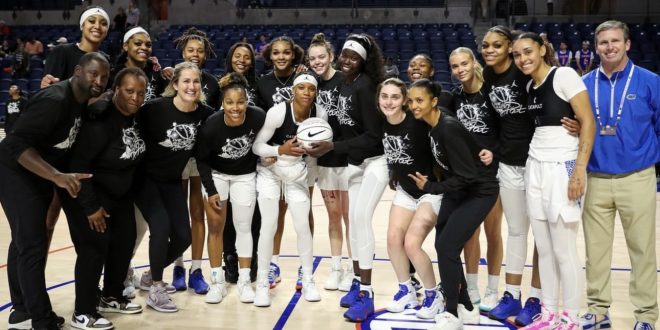 The Gators women's basketball team celebrates 800 program wins prior to tipoff against Vanderbilt on January 22, 2023. (Photo courtesy of @GatorsWBK via Instagram.)

The Florida Gators women’s basketball team played host to the Vanderbilt Commodores on Sunday. The Orange & Blue came out of the contest with a 73-55 win over the Commodores. Florida picked up its second conference win of the season, while snapping a four-game losing streak.

The Gators struck first, opening the game on a 6-0 run, with the first four points scored from Florida guard Nina Rickards. The Commodores answered right back, keeping it close at the start. Vanderbilt guard Jada Brown got things going for the Gold & White, hitting a three at the 6:31 mark in the first frame.

However, Florida would hold the lead for the remainder of the first quarter, coming out of the frame with a 17-11 advantage over Vanderbilt.

Again, Rickards put up the first four points of the second frame. The Gators, who had been 0-8 from beyond the arc, found the rim when Florida guard Alberte Rimdal swished a three at the 6:23 mark in the second quarter. Rimdal’s three gave the Gators a 28-14 lead over the Commodores.

The second frame continued to showcase an electric Florida offense. The Gators controlled the court throughout the frame, holding Vanderbilt to just ten points and 7-29 shooting from the field. Florida entered halftime with a 42-21 lead, connecting on 19-37 from the floor in the first half.

Coming out of the half, the Gator offense showed no signs of slowing down. Florida was up by double points with a 50-25 lead, four minutes into the frame.

Vanderbilt fought to stay in the contest, but the Orange & Blue remained out in front for the rest of the game. Following the game, Rickards spoke on Vanderbilt’s second half run, and how the Gators were able to close out the game with a win.

“Basketball is a game of runs and we knew Vanderbilt was eventually going to go on their run,” Rickards said. “We got together, huddled, and said this is usually the issue for us, right here. Today’s the day we have the opportunity to change it. We just stayed together, locked-in and got the job done.”

The Gators finished on top with a final 73-55 victory over Vanderbilt. Florida gained its second SEC win of the season, while putting an end to a four-game losing streak.

“Sixteen assists is probably the highest we have had in a while,” Finley said. “I think it’s feel-good basketball when everybody gets a touch and you’re confident. I thought today we had a lot of confidence and trust in each other and that really showed on the court.”

Florida’s win over Vanderbilt was a team effort, with four Gators scoring in double-digits. Rickards led the Orange & Blue with 15 points, followed by 14 from Rimdal, 13 from Gators center Ra Shaya Kyle and Gators guard Leilani Correa with 10 of her own.

Florida shot 30-65 from the floor and 11-13 from the free throw line, while collecting 46 rebounds and 16 assists. The Gators held a 48-24 advantage over the Commodores in points scored in the paint. Meanwhile, an area of improvement for the Gators will be beyond the arc. The Gators shot 2-19 from deep, with both three-pointers coming from Rimdal.

On the other end of the court, Vanderbilt shot just 19-68 from the floor and 6-19 from deep, thanks to a strong defensive effort from Florida. Florida is now 22-0 under Finely in holding opponents to 60 points or less.

The Gators also finished the contest out-rebounding the Commodores 46-38. Florida was led by a career-high 10 rebounds for Florida forward Faith Dut, with seven from Kyle and six from Deans and Correa.

“We Back Pat” Week

Sunday’s contest was part of the 12th annual “We Back Pat” Week. The week of Jan. 19-26 raises awareness for the Pat Summitt Foundation, which fights against Alzheimer’s disease. Every year, SEC schools recognize the foundation during home basketball games. Following the game, Finley stressed the importance of the event.

“She’s a pioneer for women’s basketball,” Finley said. “To be able to support her and her foundation, it really means a lot.” “She’s a legend,” Rickards added.

Up Next for Gators

Florida will next hit the road to take on the Auburn Tigers on Jan. 30. Tipoff is slated for 7 p.m.

Ellie is a third-year sports and media journalism major at the University of Florida.
@ellie_shreve
Previous Gator Diving Hosts FSU In Last Home Meet
Next Gators Women’s Tennis Rockets to a 1-0 Start